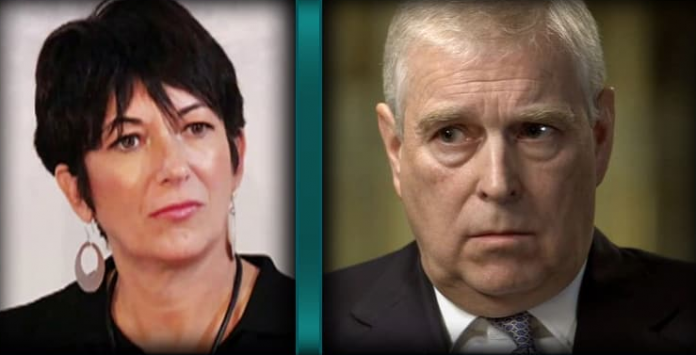 (The Post Millennial) – Following the conviction of Ghislaine Maxwell, who was found guilty on 5 of 6 counts relating to the sex trafficking of minors, Prince Andrew’s legal team has reportedly gone into “emergency talks” due to his close association with Maxwell and disgraced pedophile billionaire Jeffrey Epstein.

The British royal has been under scrutiny for years over allegations that he sexually abused Virginia Giuffre when she was underage. Giuffre is one of Epstein’s most high profile accusers who claimed that the billionaire trafficked her to Prince Andrew.

Giuffre said that a 2001 photograph of her, Prince Andrew, and Maxwell, was taken at the time she was being abused by Prince Andrew. The prince has denied the allegations and claimed never to have known her despite the photo of the two of them together. He has repeatedly claimed ignorance of the photograph and not remembering ever meeting Giuffre.

British newspaper The Mirror reported that Prince Andrew’s lawyers were in emergency talks following Maxwell’s conviction as they “considered calling on one of her victims to help him in his US civil case which includes allegations of sex abuse and first degree rape.”

“The guilty verdicts left the British socialite – a second paedophile the royal is now known to have befriended – facing up to 65 years in jail after being found to have procured, groomed and trafficked girls for sex for Epstein abuse,” the paper reported.

“The jurors’ decision has sparked fear in the Duke of York’s legal team given the burden of proof in a criminal case is far higher than that needed in a civil case, like the one Andrew is facing.”

Maxwell’s trial brought no mention of Prince Andrew, nor was Giuffre called to testify. However, after Maxwell’s conviction was announced, Giuffre went public and called for accountability for more of Epstein’s associates.

“My soul yearned for justice for years and today the jury gave me just that. I will remember this day always. Having lived with the horrors of Maxwell’s abuse, my heart goes out to the many other girls and young women who suffered at her hands and whose lives she destroyed,” she said in a statement posted to Twitter.

“I hope that today is not the end but rather another step in justice being served. Maxwell did not act alone. Others must be held accountable. I have faith that they will be.”

Earlier in 2021, Giuffre sued Prince Andrew alleging that Maxwell and Epstein trafficked her to the royal.

“Twenty years ago Prince Andrew’s wealth, power, position, and connections enabled him to abuse a frightened, vulnerable child with no one there to protect her. It is long past the time for him to be held to account,” the lawsuit said, per NBC News.

Prince Andrew’s legal team will be traveling to New York to have the lawsuit against him dismissed in the coming weeks.