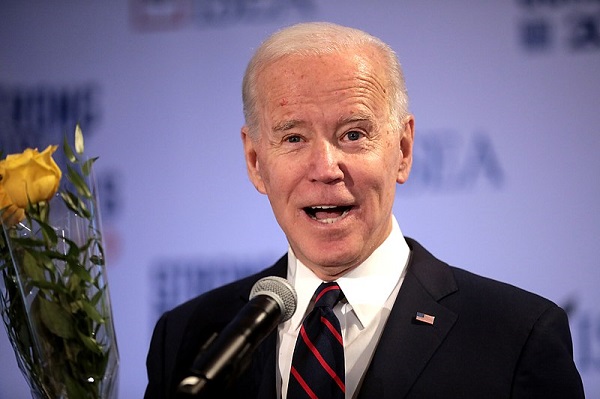 (Breitbart) – Former Vice President Joe Biden delivered his stump speech in Durham, North Carolina, on Sunday, repeating two familiar hoaxes that have become staples of his rhetoric on the stump, during interviews, and even on the debate stage.

Biden jogged out to the podium at a drive-in theater, wearing a mask, as cars and trucks honked. He slammed Trump for claiming that the U.S. was “turning the corner” on the coronavirus pandemic, even though cases were rising in some states.

When I announced my candidacy, I had not planned on running again, to be very blunt, and I’ve said it before. My son had just died, and I had no interest. And I saw those folks come out of the fields in Charlottesville, carrying torches, their veins bulging, shouting antisemitic — carrying torches. Close your eyes, remember what they looked look like, their veins bulging, shouting antisemitic bile, the same bile that was shouted in the streets of Germany in the 30’s. Carrying Nazi flags, accompanied by the Ku Klux Klan, and a young woman [Heather Heyer] was killed, protesting the opposite direction. And when they asked the president to comment, this president said something no other president has said in the history of the United States of America. He said there were “very fine people on both sides.” Very fine people.

Trump used the phrase “very fine people” specifically to refer to non-violent protesters — like Heather Heyer — on either side of a statue controversy.

This is the same man who looks at Americans who put their lives on the line for the nation, like so many tens of thousands in North Carolina have done, like my son did, winning a Bronze Star. He calls them “suckers” and “losers.” Who the hell does he think he is talking about? These are heroes.

This is an exaggerated version of the Atlantic story, which was based on anonymous sources, has not been corroborated, and has been refuted by over a dozen witnesses.

Biden did not, apparently, answer questions about allegations that his son, Hunter, sold access to the White House when he was vice president; instead, he answered a question about his milkshake.