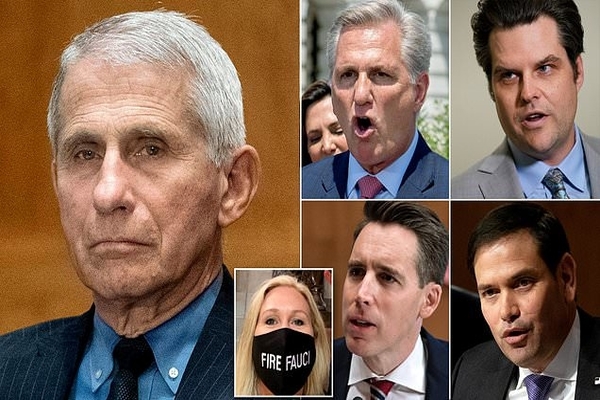 Dr. Fauci should leave his post with the Biden administration; the American people “don’t have trust” in him, said House Minority Leader Kevin Mccarthy (R-CA) during an appearance on Sirius XM’s Breitbart News Saturday.

McCarthy told host Matthew Boyle that President Biden’s chief medical adviser had squandered that trust. It is imperative that officials tasked with answering coronavirus questions, such as the origin of the virus, be trusted.

The comments of the GOP leader came after more than 3,000 of Fauci’s emails were made public by BuzzFeed News this week. As a result, new questions have been raised about the chief’s management of the coronavirus.

“I mean everything we’re finding there, how can the president— and I know the American people don’t have trust in Dr. Fauci,” McCarthy said. “Let’s find a person we can trust. Take politics aside. I mean, we’re talking about American lives here.”

McCarthy continued, “We’re talking about an administration that shifted course when they first came in, the Biden administration, and gave millions of dollars back to the World Health Organization that lied to the world that is controlled by China. We watched that they changed the direction when we were standing up to China to appease China now. This is the wrong direction, and I don’t believe anybody in America can trust that to get to the bottom of it.”

Clarifying if McCarthy believes Fauci should no longer work for Biden, Boyle asked, “So it sounds like you think he needs to go?”

McCarthy replied, “Yeah, because you do not have the trust in him.”

McCarthy joins several other congressional Republicans who have recently stated publicly they hold this position. For example, Sen. Marco Rubio (R-FL) wrote Saturday in an op-ed titled “If Biden believes in science, he must fire Fauci” that he believes Fauci “is exploiting his position in government” after dismissing the lab-leak theory and denying that American taxpayers may have funded gain-of-function research in Wuhan, China, where the virus originated.

Sen. Josh Hawley (R-MO) on Friday called Fauci’s emails “shocking” and said he should resign, while Sen. Rand Paul (R-KY) posted about him on social media this week with the hashtag “#firefauci.” Several House Republicans also made use of the hashtag this week, including Reps. Chip Roy (R-TX), Lauren Boebert (R-CO), Thomas Massie (R-KY), Dan Bishop (R-NC), and others.

Despite these calls, White House press secretary Jen Psaki said as recently as Friday that Biden would not fire Fauci, and the president himself said Friday he is “very confident in Dr. Fauci.”

McCarthy also deemed Fauci untrustworthy because of his flip-flopping on coronavirus issues — such as mask-wearing — though Fauci has attributed this to being part of the process of scientific inquiry. McCarthy quipped, “I need a chiropractor anytime he talks because he gives me whiplash from one position to the other.”

“You’ve got to trust the individuals to look into this. Hundreds of thousands of Americans have died, and as he’s taken every certain position in it, how are you able to come back with the trust of the nation to get to the bottom of it?” the GOP leader asked. “We have to know what went on and who knew what and when.”