The leak shows a conversation between staff members as they discuss banning the popular conservative account Libs of TikTok.

The account is run by Chaya Raichik, who had previously remained anonymous until she was recently doxxed by far-left blogger Taylor Lorenz’s hit piece in The Washington Post.

The internal discussion about banning Libs of TikTok was leaked to Raichik by an anonymous Twitter employee, who took screenshots of the messages.

Twitter employees are currently debating whether to ban us. We have screenshots of their internal discussion. Substack dropping shortly. Subscribe here: https://t.co/WLwnY4m2bH

During the chat dialog, employees are seen celebrating their successful removal of President Trump from Twitter.

They discuss the apparent success of banning Trump as they consider the impact of removing the additional account.

The employee chat notes that removing the Lib of TikTok account may not be in the “fiduciary” interest.

The comments appear to be a reference to the ongoing issue of censorship being exposed by Elon Musk during his purchase of the social media giant.

Twitter’s soon-to-be new owner Musk even chimed in on the conversation, asking the company, “Why?”

One employee says, “How dare you bring up fiduciary duties while trans people are literally being wiped off the face of the earth!”

The statement follows the far-left narrative of believing that any criticism or talk that does not explicitly support the transgender agenda is considered violent and inappropriate.

The small group accuses the account in question of “inciting violence” against “marginalized” people, which is a reference to the account’s efforts to expose the recent trend of drag queen shows for kids being hosted by schools and other publicly funded venues.

In the thread, the employees note that the public opinion of Twitter includes the idea that they are “irredeemably biased against conservatives.” 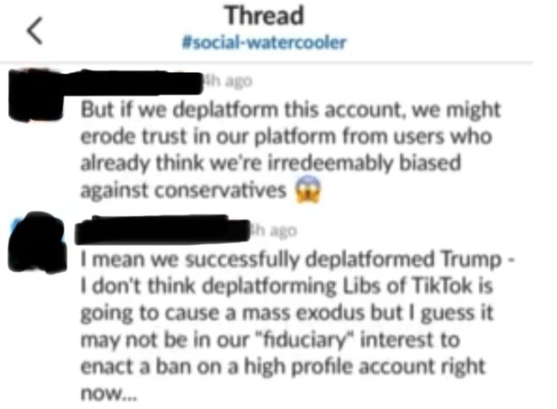 The employees say that they “despise” the activity on the social platform.

They claim it “empowers white supremacists” and causes “harmful physical and emotional violence” toward members of the LGBTQ community.

Those who opposed their message went on a mission to expose the Libs of TikTok owner in the hopes of intimidating her into silence.

It culminated with the account’s ower being doxxed by Taylor Lorenz at the Washington Post.

In a tweet late Monday, Musk spoke out against the proposed censorship, saying, “A platform cannot be considered inclusive or fair if it is biased against half the country.”