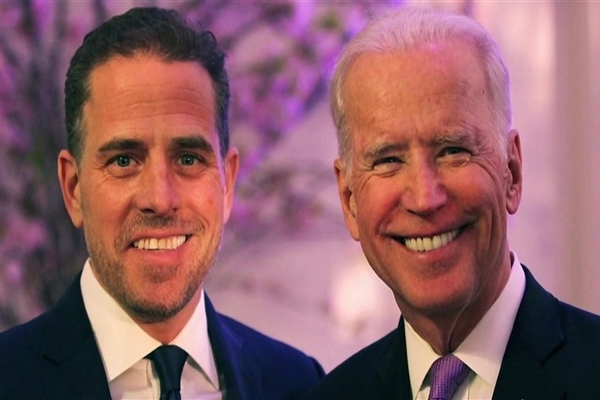 Tell-all text messages obtained from Hunter Biden’s laptop show the President’s son using racial slurs repeatedly in messages to his white attorney. Yet, radical-left and establishment media members have remained relatively silent even though their history of calling out individuals for the same.

The text messages obtained by the Daily Mail show the repeated use of the N-word by Hunter Biden while communicating with George Mesires, his attorney. Figures on the right have observed the hypocrisy from left-wing personalities and media outlets, given the track record of canceling others for like improprieties.

The 12 people below were exposed for using the N-word and faced severe personal or professional consequences, unlike Hunter Biden.

Country music star Morgan Wallen faced swift backlash after a video emerged showing the “Whiskey Glasses” singer using the N-word after a night out with his friends. In the video, he said, “take care of this pussy-ass n****.” The fallout resulted in WME (talent agency) dropping the star and radio networks and major streaming platforms. He was also disqualified from the 2021 ACM Awards.

Wallen apologized for using the slur, telling TMZ, “I am embarrassed and sorry. I used an unacceptable and inappropriate racial slur that I wish I could take back. There are no excuses to use this type of language, ever. I want to sincerely apologize for using the word. I promise to do better.”

The former Charlotte Hornets broadcaster John Focke was fired for mistakenly using the N-word about the Hornets-Nuggets game, typing the N-word instead of “Nuggets.” The tweet was deleted, and an apology was made, writing, “Earlier today, I made a horrific error while attempting to tweet about the Denver-Utah game.”

“I don’t know how I mistyped; I had (and have) no intention of ever using that word,” he said. “I take full responsibility for my actions. I have been sick to my stomach about it ever since. I’m truly sorry that this happened, and I apologize to those I offended.”

The Charlotte Hornets announced that he would not return as the radio broadcaster “due to a violation of the organization’s social media policy.”

Donald McNeil, a veteran New York Times reporter, resigned after 45 years for using the N-word, responding to a question by a student, who asked whether he believed a classmate should have been suspended “for a video she made as a 12-year-old in which she used a racial slur.”

“To understand what was in the video, I asked if she had called someone else the slur or whether she was rapping or quoting a book title. In asking the question, I used the slur itself,” he wrote in the resignation letter, adding, “I should not have done that. Originally, I thought the context in which I used the word could be defended. I now realize that it cannot.”

After he used the N-word twice in front of employees, Jonathan Friedland, chief of communications, was fired by Netflix.

“I’ve made a decision to let go of Jonathan Friedland,” Netflix CEO Reed Hastings wrote in a memo to staff in 2018. “Jonathan contributed greatly in many areas, but his descriptive use of the N-word on at least two occasions at work showed unacceptably low racial awareness and sensitivity, and is not in line with our values as a company.”

Kyle Larson, a NASCAR driver, was suspended last year after using the N-word during a video game broadcast. As a result, Chip Ganassi Racing ultimately fired him, and he lost sponsors.

“I was just ignorant. And immature. I didn’t understand the negativity and hurt that comes with that word,” he later told the Associated Press. “That’s not a word that I had ever used. I grew up in Northern California, all I ever did was race, and that’s all I was focused on. There’s probably a lot of real-life experiences I didn’t get to have, and I was just ignorant to how hurtful that word is.”

He is now able to compete again after meeting NASCAR’s requirements.

“NASCAR continues to prioritize diversity and inclusion across our sport. Kyle Larson has fulfilled the requirements set by NASCAR and has taken several voluntary measures to better educate himself so that he can use his platform to help bridge the divide in our country,” NASCAR said in a statement.

“I wouldn’t have sung the word, that’s for sure. I learned that lesson,” he added. “But I am who I am, and if it doesn’t fit in this locker room, I think for a lot of players, it was a good match and sometimes an excellent match but not with all of them.”

In 2015, Andrea Quenette, a communications professor at the University of Kansas (KU), was placed on leave after students filed a complaint after she used the N-word to “describe an incident that reportedly occurred on the University of Missouri campus,” as Breitbart News reported at the time.

“I was simply trying to suggest that because racism can be expressed in different ways, KU needs to find solutions to race and diversity issues that are specific to the problems on our campus,” she said, explaining herself. “This term I used is not a word I use, but I used it in this situation only in the retelling of an actual event that occurred on the University of Missouri campus.”

In 2016, Rebekah Cook, a Texas middle school teacher, was placed on administrative leave after school officials learned she used the “N-word” during a history class on the Civil Rights Movement.

Lawrence Rosen, a professor emeritus of anthropology at Princeton University, was criticized for using the N-word during a class on “hate speech, blasphemy, and pornography”:

According to the Daily Princetonian, Rosen posed an unusual hypothetical about the offensiveness of the epithet. However, according to student accounts, Rosen did not have to use the word to get his point across based on the context of the class.

Rosen ended up having to cancel the course because of the controversy over his use of the N-word.

Rose Salseda, a Stanford University history and art professor, was removed from the university’s website after “being accused of singing along to a rap song by N.W.A. including a racial slur.” She later apologized to the Stanford community.

Mimi Groves, a student at Virginia high school, was “forced to withdraw from the University of Tennessee resulting from a smear campaign launched by one of her classmates,” as Breitbart News reported:

Classmate Jimmy Galligan shared a three-second video dating back to 2016 of Groves using a racial slur while singing along with a rap song.

The New York Times celebrated the student for sharing the video of Groves using the N-word as she sang along to the rap song.

President Biden is quoted using the N-word over a dozen times in a series of Senate hearings in 1985, according to U.S. Senate transcripts. In addition, he has a record of making racially insensitive comments.

Hunters repeated use of the N-word had not been commented on by President Biden or VP Harris as of yet, according to Breitbart News.