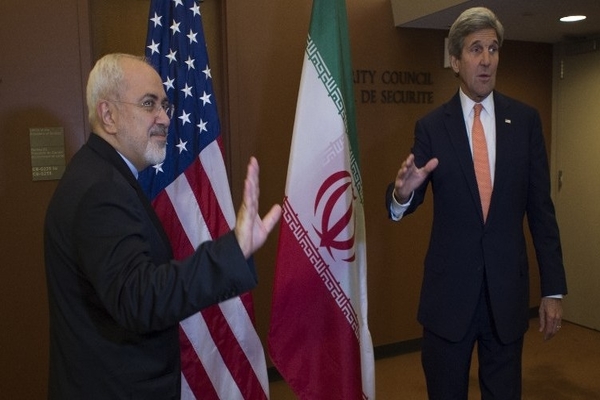 According to the Times, Zarif revealed he was often kept out of security matters “sometimes to his embarrassment” and that “to his astonishment,” Kerry told him that Isreal had attacked Iranian interests in Syria at least 200 times. Kerry continued to meet with Zarif even after leaving office.

The Times described the recording as “a conversation in March between Mr. Zarif and an economist named Saeed Leylas,” was first leaked to Saudi-owned Farsi- language news channel Iran International, which is seen as hostile to Iran.

Zarif commented in a March interview with an Iranian journalist that wasn’t supposed to be released until August when President Hassan Rouhani leaves office.

The recording suggests that privately, Zarif and others within the Iranian regime might have been glad that the U.S. killed General Qasem Soleimani, terrorist leader of the Iranian Revolutionary Guard Corps, last year.

Zarif says, “The United States delivered a major blow to Iran, more damaging than if it had wiped out an entire city in an attack,” the Times reported. “But he said some of Mr. Suleimani’s actions also damaged the country.”

(Democrats, including then-candidate Joe Biden, criticized the attack on Soleimani at the time.)

Zarif also suggested that the IRGC often dictates government matters in Iran and that Russia had worked with Soleimani to thwart the 2015 nuclear deal.

Zarif criticized Soleimani for moving military equipment and personnel to Syria on state-owned Iran Air and allowing Russian warplanes to fly over Iran on their way to bomb Syria.

Zarif mentions several times during the recording that the interview was never intended for publication.

HotAir’s Ed Morrissey wrote: “While no one would be surprised to hear that Israel carries out covert operations against Iran, why in the world would an American Secretary of State pass that information to a regime that leads ‘Death to America’ protests in its streets? Isn’t this the real news in the US, especially with Kerry now joining another administration as its ‘climate change envoy’?

“At best, this shows that Kerry is enormously and irresponsibly indiscreet; at worst, he’s exposing American intelligence to an enemy in order to attack an ally. And frankly, it looks a lot more like the latter than the former, and a lot more like an actual crime by a high-ranking US government official.”