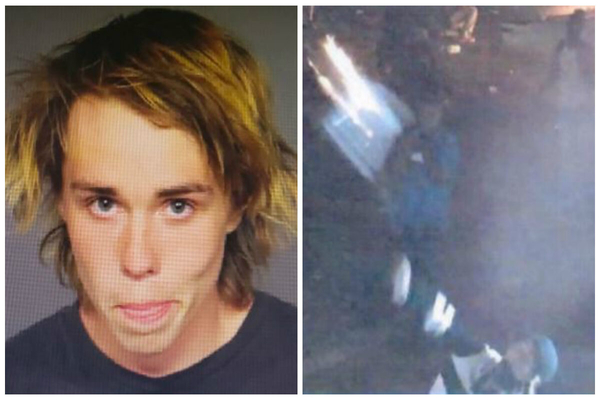 Dylan Shakespeare Robinson, a 23-year-old from Minnesota was sentenced, after pleading guilty in December of conspiracy to commit arson. He received four years in prison after helping set fire to a Minneapolis police station.

Robinson has been ordered to pay $12 million in restitution for damage to Minneapolis’s third police precinct during the riot on May 28, 2020, stated the U.S. Attorney’s Office for the District of Minnesota.

“Mr. Robinson chose to depart from lawful protest and instead engaged in violence and destruction,” said Acting US Attorney Anders Folk. “The arson at the Minneapolis Police Department’s Third Precinct put lives at risk and contributed to widespread lawlessness in Minneapolis.”

Folk added, “with today’s sentence, Mr. Robinson is held accountable for his actions.”

After being caught on video surveillance throwing a Molotov cocktail, Robinson pleaded guilty in mid-December to one count of conspiracy to commit arson, as stated in the criminal complaint.

Robinson was seen offering assistance in lighting another individual’s Molotov cocktail, which was thrown toward the police station last year at the height of rioting during the Geroge Floyd protests.

The other co-conspirators include Bryce Michael Williams, Davon De-Andre Turner, and Branden Micheal Wolfe. They have pleaded guilty to one count each of conspiracy to commit arson for their roles in the arson; all are currently awaiting sentencing.

Robinson’s actions also gathered the attention of the Bureau of Alcohol, Tobacco, Firearms, and Explosives (ATF).

“ATF is committed to investigating the civil unrest arsons of 2020 that occurred throughout the Twin Cities,” said Assistant Special Agent in Charge Jeff Reed, who represents the ATF St. Paul Field Division. “Arson, being inherently violent, is a serious crime that put many of our community members at risk, and it cannot be tolerated.”