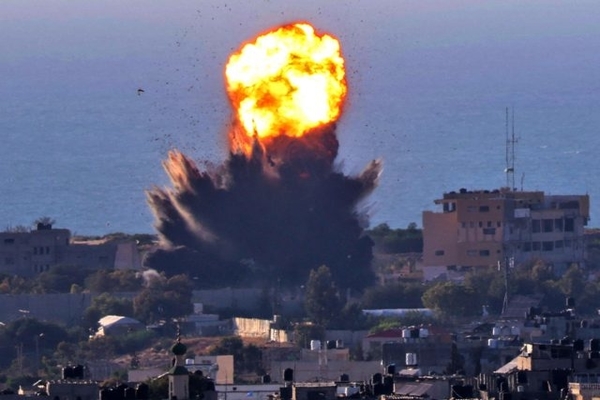 The Israel Defense Forces (IDF) reported that it had killed “dozens” of terrorist operatives inside the building as an airstrike was conducted on intelligence headquarters used by the Palestinian terrorist group Hamas in Gaza.

The Times of Israel reported:

The Israel Defense Forces say it just conducted an airstrike on a Hamas intelligence facility with dozens of terrorist operatives inside.

The military says the site served as the main command center for its surveillance network.

It is not immediately clear how many Hamas members are killed in the strike.

The Israel military released video of the apparent attack:

Circulating on social media are other unconfirmed videos:

Dozens of Hamas operatives were eliminated on Thursday in several targeted attacks on Hamas compounds throughout the Gaza Strip.

The IDF destroyed the terror group’s central bank and internal security headquarters and the home of a top Hamas commander. They also eliminated dozens in an attack on a Hamas intelligence complex.

The IDF plans a ground invasion in the next couple of days of Gaza to find Hamas terrorists and weapons. According to the Times of Israel, an IDF spokesman said: “We are gathering forces on the Gaza border, preparing them. They are studying the field, and we will use them when we decide to. … The initiative is ours, and time is on our side.”

The Post reported up to 7,000 reservists have been called up by the Israeli military, military vehicles and artillery have begun to mobilize at the border with Gaza.