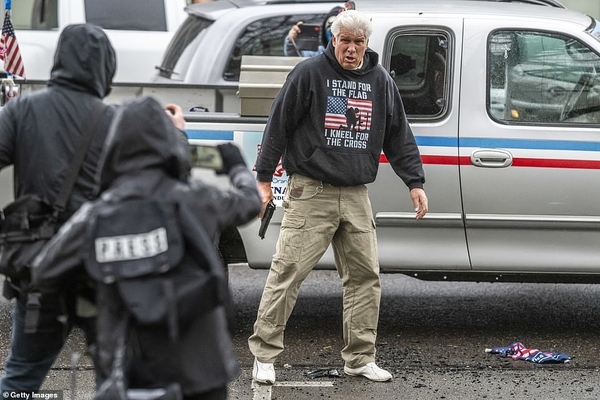 Antifa protesters appear to assault a man and vandalize his vehicle near the state capitol in Salem, Oregon.  Police have not arrested the man who pulled his pistol after being pepper-sprayed by Antifa.

In a video posted to Twitter, Melissa “Claudio” Lewis, self-described Antifa Press journalist, shows an Antifa group armed with batons and pepper spray surrounding a man whose truck had just been vandalized.  Initially, it appears Antifa protesters fired paintballs at the windshield of the man’s vehicle.

A Vietnam Veteran sign appears on the truck’s side, which is decorated with red, white, and blue stripes and is flying multiple flags.  The man exited his vehicle, moving to the rear. Antifia protesters dressed in all black clothing, helmets, body armor, and long pipes or batons while brandishing pepper spray approached the man.

Showers of glass can be seen at the 24-second mark of the video.  Antifa had just smashed the right rear window.  The back window had a sticker saying, “Don’t Portland my Oregon.”

The man, hearing glass smashed, proceeds around the vehicle.  Someone off-camera at the 32-mark appears to spray the man with pepper spray.  He shakes off the spray and draws his concealed pistol.  He loads a round into the gun and holds it to his side-telling Antifa protesters to get back.

“Get away from me,” the man yells while holding out his non-gun hand. He starts to walk back around the rear of his truck while continuing to point the gun at the ground

Police officers approached at this point, telling the man to put down the gun.  He complies by placing the gun in the bed of his truck.  The “Abolish The Police” “protesters” were heard screaming for the police to arrest their victim. After the responding police officer ordered the man to the ground, the Antifa cheered and shouted, “Yeah b*tch, get on the ground, b*tch!”

In a second video tweeted by Independent Media PDX, a different angle is shown; the repeated sounds of Antifa attacking the truck can be heard.

You can see in this angle the man only pulled his gun after being attacked with pepper spray for the second time:

A woman was reportedly nearly killed after Antifa threw a tree branch through her window.

More videos from throughout the day showing the mob scene:

Police did not arrest the man and are investigating the incident, according to The Oregonian.  Oregon State Police Captain Tim Fox told the newspaper they are investigating the case.  Three other people were arrested and charged with disorderly conduct, trespass, and unlawful pointing of a taser during the protest.

In a statement released by the Salem PD – The three people arrested appear to be leftist rioters:

The Biden administration is doing nothing to stop these rioters but actively plotting to strip patriotic Americans of their rights, declaring them “suspected domestic extremists” and putting them on the No Fly List.