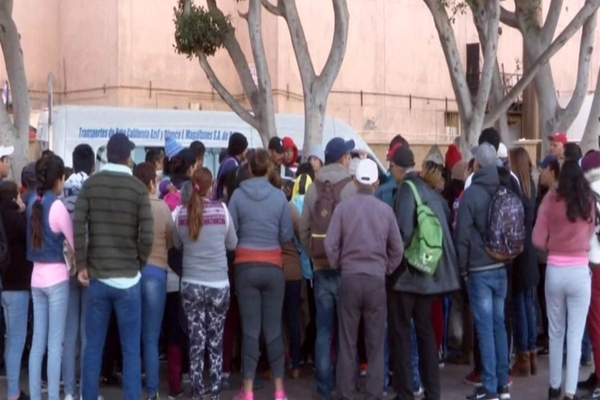 The Biden administration announced Friday; it wants $52 billion for the Department of Homeland Security (DHS) from October 2021 to September 2022.

The pro-migration budget request asks Congress to take money back appropriated in prior years for the construction of the border wall:

The discretionary request includes no additional funding for border wall construction and proposes the cancellation of prior-year balances that are unobligated at the end of 2021.

Biden’s deputies halted the border wall construction; many of the gaps used by migrants could be closed using the unspent money allocated by Congress in 2019 and 2020. Allocated funds not obligated to contractors are more than $1 billion.

Biden’s budget does not ask for extra funds to hire more agents to block and deport the roughly one million migrants seeking American jobs, wages, and schools.

Biden does ask for extra funds to ensure that more border agents and enforcement officers can face threatened or real investigation of claimed crimes:

This funding level also provides $470 million, an additional $84 million over the 2021 enacted level, for the Offices of Professional Responsibility at Customs and Border Protection and Immigration and Customs Enforcement to ensure that DHS workforce complaints, including those related to white supremacy or ideological and non-ideological beliefs, are investigated expeditiously.

The discretionary request proposes increasing funding for the Office of Civil Rights and Civil Liberties to address the press of complaints the office has received but has been unable to process because of staffing shortages.

Biden’s budget wants to ensure DHS and the Department of Health and Human Services (HHS) welcomes and accelerate the inflow of migrants into American’s blue-collar jobs, housing markets, and K-12 schools:

Restores America’s Promise to Refugees. The discretionary request provides $4.3 billion to the [HHS] Office of Refugee Resettlement (ORR). This funding level would rebuild the Nation’s refugee resettlement infrastructure and support the resettling of up to 125,000 refugees in 2022, which would represent the highest number of refugees admitted to the United States in 30 years.

Refugees are hired for low-wage jobs in slaughterhouses and retail stores, reducing the need for companies to hire American’s at higher wages.

The budget seeks funds from taxpayers to hire lawyers to guide migrants through American immigration law, past the immigration judges who would return them, straight into legal status:

The discretionary request for [HHS} ORR also reflects a commitment to ensuring unaccompanied immigrant children are unified with relatives and sponsors as safely and quickly as possible and to providing these children with care and services that align with child welfare best practices while they are in ORR’s custody. Such services would include expanded access to counsel [emphasis added] to help children navigate complex immigration court proceedings. In addition, the discretionary request redresses past wrongs by providing resources for critical supportive services—including trauma and mental health services—to children cruelly separated from their families under the previous administration.

DHS should also get more money to accelerate the movement into American’s jobs, according to the budget request:

The discretionary request provides $345 million for the United States Citizenship and Immigration Services to address naturalization and asylum backlogs [of migrants seeking green cards], support up to 125,000 refugee admissions in 2022, and allow for systems and operations modernization. The discretionary request supports expanded access to the Alternatives to Detention program and provides enhanced case management services, particularly for families seeking asylum.

More money to the Department of Justice to hire pro-migration judges who often stop deportation cases and rubber-stamp requests for green cards and asylum:

In order to address the nearly 1.3 million outstanding cases before the immigration courts, the discretionary request makes an investment of $891 million, an increase of $157 million or 21 percent over the 2021 enacted level, in the Executive Office for Immigration Review. This funding supports 100 new immigration judges, including support personnel, as well as other efficiency measures to reduce the backlog.

The Biden document decares that the budget request “supports the promise of a fair and equitable immigration system that welcomes immigrants and reflects the Nation’s values.”

The funding request would eliminate spending on the border wall — but drastically ramps up spending on Democrats’ pro-migration and other priorities, including “climate change.”

The request wants funding for “Confronts Climate Change and Other Disaster Challenges,” saying:

Revitalizes Research and Development Capacity. The discretionary request proposes $599 million for investments in research, development, and innovation across the Department to lay a strong foundation for securing the American public from future threats. These projects would focus primarily on climate resilience, cybersecurity data analytics, and transportation security technologies.

The opposition is built on the widespread recognition that migration moves money away from most Americans.