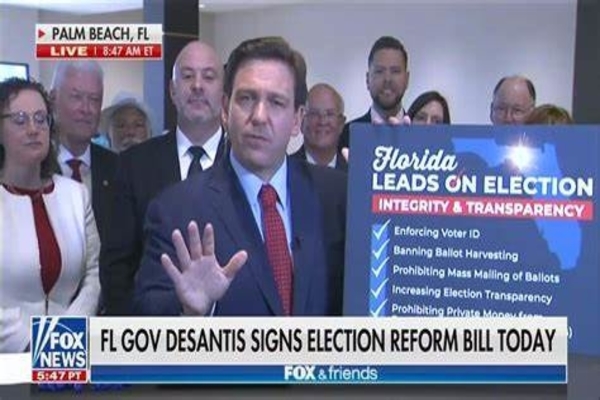 A new election security law condemned by the White House, the law, has been signed by Governor Ron DeSantis (R-FL).

“Florida is moving in the wrong direction,” Deputy press secretary Karine Jean-Pierre said to reporters aboard Air Force One.

“Me signing this bill here says, ‘Florida, your vote counts. Your vote is going to cast with integrity and transparency, and this is a great place for democracy,’” DeSantis said at a signing ceremony for the bill.

The 2020 presidential election was “one of the most secure elections in American history,” argues Jean-Pierre. Republicans have concerns about significant changes to the voting rules due to the coronavirus pandemic.

“There’s no legitimate reason to change the rules right now to make it harder to vote,” she said. “That’s built on a lie.”

Jean-Pierre also criticized Republicans for passing new laws to secure the election, accusing them of preventing Democrats from voting.

“The only reason to change the rules right now is if you don’t like who voted, and that should be out of bounds,” she said.