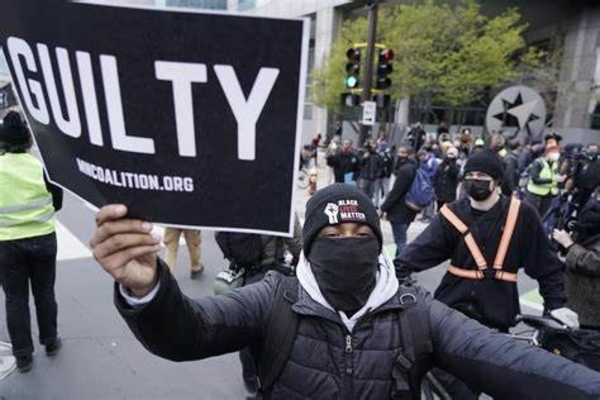 Derek Chauvin was found guilty of all three charges – second-degree unintentional murder, third-degree murder, and second-degree manslaughter over the death of George Floyd.

“Under Minnesota sentencing guidelines, Chauvin faces 12-1/2 years in prison for his murder conviction as a first-time criminal offender,” Reuters reports. “Prosecutors could, however, seek a longer sentence up to the maximum of 40 years if Hennepin County District Judge Peter Cahill, who presided over the trial, determines that there were ‘aggravating factors.'”

All the evidence indicated Floyd died of a fentanyl overdose combined with meth. It is likely drugs were swallowed before his arrest like he did during a prior arrest in 2019 caught on tape.

The facts of the case did not matter, as the threats of the jury’s identity being leaked and the city going up in flames were pressure enough to find him guilty.

The fact the trail wasn’t moved out of the city was a sick joke, as the demographics were rigged against him.

Here’s what we know about the jurors who have been seated.

This appears to be a ritual sacrifice to Black Lives Matter.

Riots were called for by Maxine Waters if Chauvin was not found guilty and President Biden said he was “praying” for the guilty verdict, while jurors were still under deliberations.

A second trial on appeals seems possible but seeing how rigged this case was in the first place, and there’s a likelihood for it to be rigged as well.

While Biden was running, he said that “white man’s” “English jurisprudential culture” needs to be scrapped, and now in most major cities, it is officially gone.