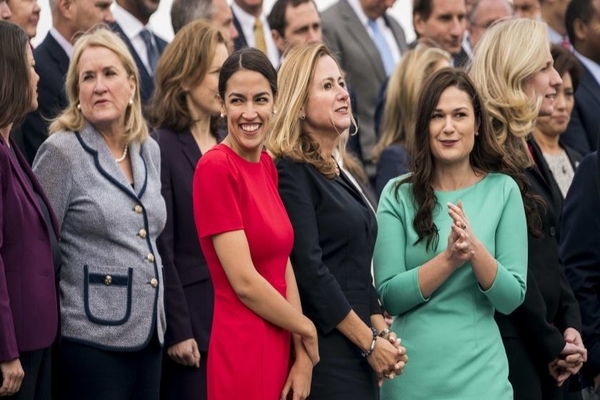 Democrats are criticized by Rep. Alexandria Ocasio-Cortez (D-NY) for failing to support progressive demands for a $15 minimum wage; they are living in a “dystopian capitalist nightmare.” She added that the minimum wage should be $24 an hour.

She defended the progressive push for $15 minimum wage during an appearance on The Mehdi Hasan Show.

“Any person who thinks that a $15 minimum wage is the ‘crazy socialist agenda’ is living in a dystopian capitalist nightmare. And we should not prop that up. We should not continue that,” she said.

“There are basic goods that people can’t afford to live on $7.25 an hour, she continued, arguing that it is “deeply, deeply shameful” that they are having this conversation in the first place.

“Because when you take the minimum wage from several decades ago, and you actually account for inflation and productivity gains to today, it should be $24 an hour,” she continued.

Democrats must understand “how deep a compromise $15 an hour is,” she noted the multi-year phase-in.

“In the United States of America, you should you know if you are working a full-time job, you should be able to afford to live,” she continued:

Including Ocasio-Cortez, nearly two dozen Democrats are demanding the addition of a $15 minimum wage in the $1.9 trillion coronavirus relief proposal.  The Senate parliamentarian ruled out that option last week.

The lawmakers have sent a letter to the White House.  The letter essentially asked for an override on the decision.

“Eighty-one million people cast their ballots to elect you on a platform that called for a $15 minimum wage,” the lawmakers wrote in the March 1 letter.

“We urge you to keep that promise and call on the Presiding Officer of the Senate to refute the Senate Parliamentarian’s advice on a Byrd Rule point of order and maintain the $15 minimum wage provision in the American Rescue Plan,” they continued.

“We must act now to prevent tens of millions of hardworking Americans from being underpaid any longer,” they continued.

“You have the authority to deliver a raise for millions of Americans,” they concluded in the letter signed by Rep. Ro Khanna (D-CA) and others, including Reps. Ilhan Omar (R-MN), Rashida Tlaib (D-MI), Cori Bush (D-MO), and Pramila Jayapal (R-WA)