(Big League Politics) – House Democrats have written a letter to Cyber Ninjas Inc. in an attempt to discredit their audit of presidential election results in Arizona.

Cyber Ninjas is a Florida-based cybersecurity firm that finds and fixes technological vulnerabilities. The company has conducted an audit of 2020 election ballots cast in Maricopa County, the largest county in Arizona and home to the city of Phoenix. In a letter to chief executive officer and principal consultant Douglas Logan, the US House Committee on Oversight and Reform said that Cyber Ninjas has an “apparent lack of experience in conducting election-related audits” and reportedly “engaged in sloppy and insecure audit practices that compromised the integrity of ballots and voting equipment.”

“Americans’ right to vote is protected by the Constitution and is the cornerstone of our democratic system of government,” the letter reads. “The Committee is seeking to determine whether the privately funded audit conducted by your company in Arizona protects the right to vote or is instead an effort to promote baseless conspiracy theories, undermine confidence in America’s elections, and reverse the result of a free and fair election for partisan gain.”

After fleshing out these accusations over several pages, the letter concludes by asking Cyber Ninjas to turn over a trove of documents to the Committee: 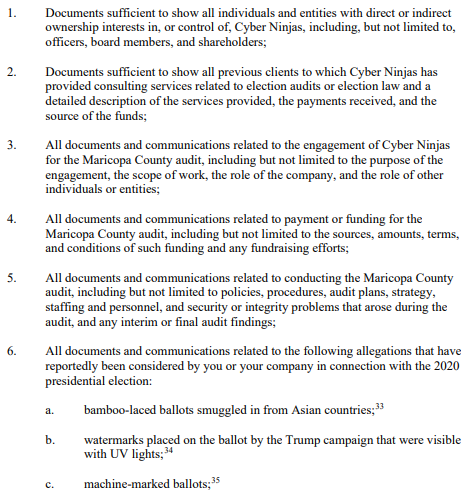 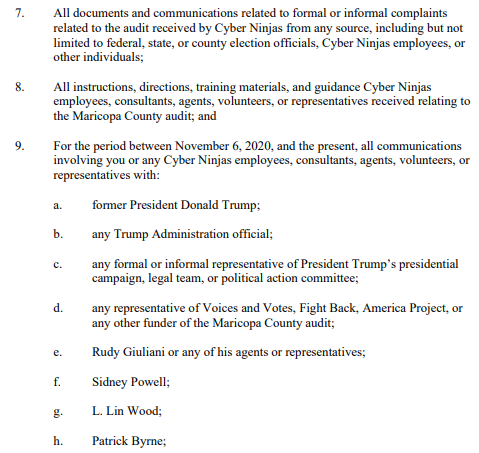 The announcement of the Maricopa County audit results will begin at 10am PST/1pm EST. It will be livestreamed here. Arizona Senate President Karen Fann said Tuesday that although she doesn’t know the exact discrepancy, the audit’s ballot totals nevertheless do not match those of Maricopa County.