(Big League Politics) – The partisan allegiances of the American public have shifted in a historic fashion since the onset of Joe Biden’s reign on the presidential throne, with new polling from Gallup revealing that Republicans have overtaken the Democratic Party as the most popular political party in the nation. 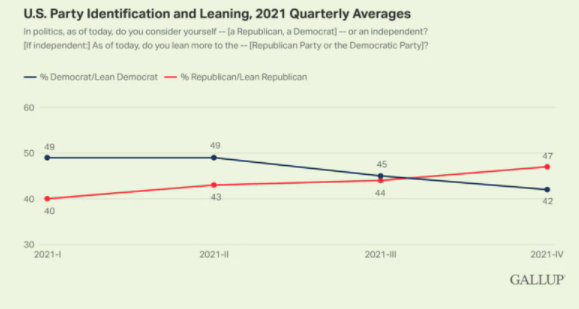 The nine point lead the Democratic Party possessed at the start of 2021 amounted to the biggest partisan lead Gallup has ever polled. Conversely, the five-point lead possessed by the GOP amounts to the biggest lead Republicans have ever had over the opposition. It’s far more common in American political history for registered Democrats to outnumber Republicans, with the GOP traditionally possessing a slight edge with independents.

The faring of the Democratic Party appears to correlate strongly with the political prospects of President Joe Biden, who entered office with bipartisan popularity, only to squander support amid the seemingly limitless policy failures of his hapless administration en route to polling as the most unpopular first-term President in modern American political history.

A broad transition of Hispanics from a demographic affiliated with the Democratic Party may play a considerable role in the realignment of the American voter base, as well as college-aged suburban white voters who traditionally vote Republican but were turned off from the GOP for various reasons in the 2020 election.

If such a partisan alignment of the public were to persist towards the 2022 midterms, it’s all but assured the extremist globalist party would incur losses in both chambers of Congress that rival the midterm elections of 2010 and 1996.