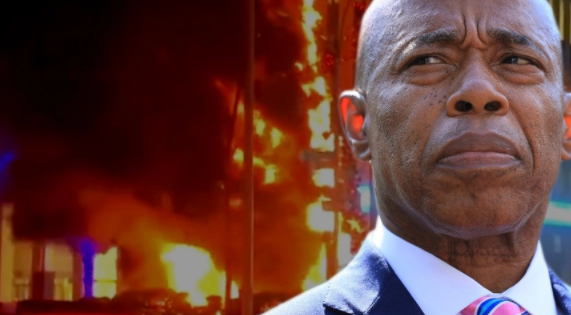 (The Post Millennial) – The purported arsonist who set the News Corp Christmas tree on fire being allowed to walk free amid his misdemeanor charges is a prime example of why judge’s need bail again, says New York City’s Eric Adams.

The misdemeanor charges that 49-year-old suspect Craig Tamanaha faced at the time of his arrest were not bail eligible under New York law. In the case of Arson specifically — it’s only a felony if it inflicts harm on someone else, or is a part of a hate crime.

Tamanaha has a previous rap sheet of public intoxication and drug possession. Per Fox News, the suspect lit a piece of cardboard to set the tree on fire and caused $500,000 worth of damages.

I asked @ericadamsfornyc what he thought about the Christmas tree arson suspect being released without bail. He said it’s a “picture perfect example” of why the law needs to be tweaked, to give judges more discretion. #abc7ny pic.twitter.com/e2qu0UQ7Jf

“This guy has clearly made a decision that, you know, I’m just going to continue to wreak havoc. Arson is a serious crime and judges should be able to look at the person in front of them on those violent actions and make a determination. That is the missing piece,” said the incoming Mayor according to the New York Post.

In the past week, a homeless man with a history of assaults was cleared for release once again by a New York judge after the suspect assaulted two women in broad daylight. Waukesha massacre suspect Darrell Brooks had also been let go by authorities on low bail early last month, days before driving a red SUV through the town’s Christmas parade.

Elsewhere, officials in Los Angeles are also publicly pleading for the reinstatement of stricter bail conditions amid a retail theft crime spree sweeping parts of the state.