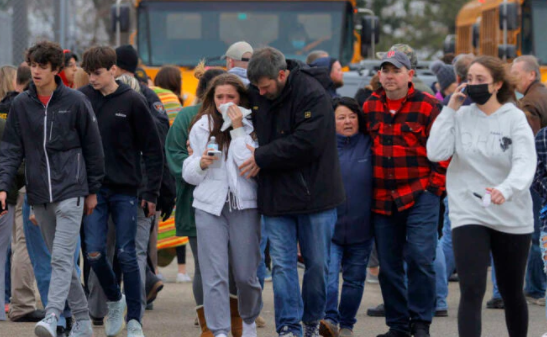 (Big League Politics) – Over 150 Michigan School Districts did not hold classes on Friday, December 3rd after supposedly receiving threats from potential shooters. This is possibly one of, if not the biggest, non-weather related closings in history.

For the first time in our nearly 10 years reporting school closings, we have never seen this many closings, due to online threats.

While the vast majority of these threats were supposedly made in private with nothing provided by the school districts, it is widely believed by both the schools and the media that these are attempts to copy the threats made prior to the Oxford High School shooting which claimed the lives of four students. Big League Politics has previously reported on both the shooting shortly after it happened and also the details on the fugitive warrant issued for the shooter’s parents.

One notable threat in Flint involved a 17 year old student recording her own rap song where she threatened to shoot up her school “like Oxford” before uploading the rap video to social media. The unidentified student of Flint Southwestern Classical Academy is charged with one count of false threat of terrorism and one count of using a computer to commit a crime.

Our thoughts go out to the families and friends of the Oxford High School victims. We continue to think of the students and staff that were impacted by this devastating incident.

We at Big League Politics mourn the losses of those who died and pray for all of those affected, but something very strange is going on. It’s clear there is some sort of cult of obsession with this school shooting. On one hand, you seemingly have hundreds if not thousands of students attempting to replicate Ethan Crumbley’s disgusting threats for their own gain or personal gratification. On the other hand, you have the left-wing media, anti-gun politicians, and the teacher’s union lobbies absolutely bombarding us in an attempt at martyrdom. This strategy is not only deceitful, but completely disrespectful to the children who died to use their deaths to further their political careers.

This morning, a woman in my district who teaches at Oxford messaged me saying she and her colleagues who survived the shooting "need to do something more tangible than cry." Because if we continue to do nothing, this will keep happening, again and again and again and again. pic.twitter.com/bbyTTabrIc

Michigan Attorney General Dana Nessel, who threatened to prosecute whistleblowers for noticing obscurities in the 2020 election, insinuated that due to the tragedy, you should not be able to purchase a gun at the age of 18. Nessel failed to mention that Oxford shooter Ethan Crumbley is 15 years old and did not purchase the weapon that he used in the attack. Crumbley used a weapon purchased by his father, James, who is 45. So how exactly would raising the gun age have changed anything? Are you going to raise it to 50?

In an interview with the @MichiganAdvance after the Oxford High School shooting, AG @dananessel made the case for gun reform: "Why can you buy a deadly weapon when you're 18 but not a Budweiser? I mean, it's outrageous." https://t.co/Bk577jWphu

While the shooting is tragic, and changes should be implemented to stop this, it is clear that the Democrats and their allies are going to abuse this to disarm the general population and institute more draconian changes to schools across the state. Gun control wouldn’t have prevented this, real changes for the benefits of safety and school districts could have though.

We would like to take a moment to recognize Tate Myre, who selflessly sacrificed himself for the safety of his brothers and sisters in the Oxford High School shooting by rushing the attacker. The Bible tells us there is no greater love than one who lays down his own life for his friends. May he Rest in Peace.

This young man is Tate Myre & he died a hero when he rushed the school shooter in Michigan. God bless you, sir. I wanna be like you when I grow up. pic.twitter.com/3G9QnQuYsA