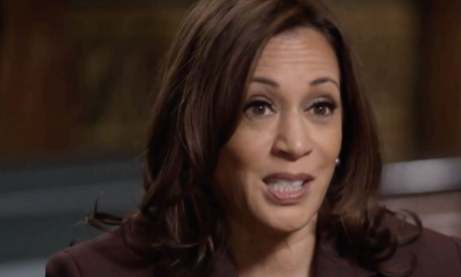 (The Post Millennial) – Vice President Kamala Harris was asked on CBS’s “Face The Nation” what is the biggest security challenge facing the United States. “Democracy,” the vice president answered in an apparant gaffe during an interview that aired Sunday.

In the aired segment, CBS News host Margaret Brennan asked the vice president: “What do you see is the biggest national security challenge confronting the US? What is the thing that worries you and keeps you up at night?” she questioned.

“Frankly, one of them is our democracy…” Harris said to Brennan. “I think no question in the minds of people who are foreign policy experts that the year 2021 is not the year 2000. You know, I think there’s so much about foreign and domestic policy that, for example, was guided and prioritized based on Sept 11, 2001.”

“And we are embarking on a new era where the threats to our nation take many forms. Including the threat of autocracies taking over and having outsized influence around the world,” Harris continued during the sit-down talk.

Later on in the interview, Harris clarified the earlier comment, stressing that she meant to say there is a need to “fight for the integrity of our democracy.”

Harris also denied the Biden administraton’s responsibility for the botched US withdrawal from Taliban-controlled Afghanistan back in August that left 13 US service members killed and Americans stranded behind in the war-torn nation.

“You said you were last in the room on the decision in Afghanistan to pull out. You’ve talked about not abandoning allies,” Brennan said.

Brennan pressed Harris: “Do you feel personal responsibility for the chaos of that withdrawal?” To which, Harris instead blamed the Trump administration.

“I think it’s really important to remember that the previous administration negotiated a deal with the Taliban, did not invite the Afghan government to be at the table, and negotiated a deal that required and promised as part of an agreement that we would pull out by the end of May,” she said to Brennan.

“So we were saddled with that responsibility based on an agreement between the United States and the Taliban. We made the decision that if we were to break the agreement, it would have been a whole other situation right now,” she added.