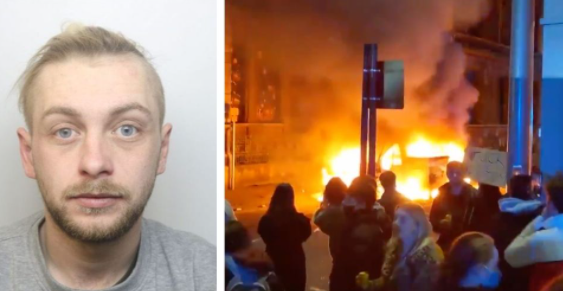 (The Post Millennial) – A 25-year-old man that played a large roll in the destructive Bristol riot in March that attempted to set fire to police vehicles while officers were inside has been sentenced to jail for 14 years.

According to the Avon and Somerset Police Department, Ryan Robert was the first person to be convicted of the offense of riot by a jury in the South West following his trial held in October.

At Bristol Crown Court on Friday, Judge James Patrick said Roberts was “actively involved in attacking the police,” played a “leading role” in trying to smash into Bridewell Police Station and “used the uncontrollable weapon of fire.”

Roberts was filmed “throwing missiles at police officers, kicking their shields and striking one with his hand before attacking the Bridewell,” according to police. He also repeated hit an officer with a police baton, before damaging three police vehicles and attempting to roll over one, which he set on fire.

He was also filmed on multiple occasions attempting to start a fire under a police van with an officer inside, threatening at one point that the officer’s van is going to explode.

“I was sat in a van and heard over the radio that my van was on fire. I sat in that van, unable to move it as the tires had been let down, unable to see out of the driver’s side as the window had been sprayed over and the wing mirror smashed off…I wondered how I could get out the van with the doors bolted closed, in my heavy bulky uniform. I thought I must take the van keys with me, as I could smell burning and the van started to fill with smoke,” an excerpt from a victim impact statement said.

“I came to the conclusion that it was better to sit in a burning van. To hope that my overalls would protect me from some of the flames…I actually sat in my van and had to decide whether I would rather be dragged into a crowd alone and seriously assaulted or sit there and potentially burn. That is not a decision I would wish anyone else to have to take,” said another excerpt.

What some #antifa groups have been saying about the #Bristol, England riot last night where rioters started fires, assaulted police & tried to break inside the police station: pic.twitter.com/UmOLozvieI

“Not only did he repeatedly target officers by hitting and kicking them and throwing large objects at them, but he attempted to set fire to vehicles with officers inside, leaving some to contemplate whether it was better to stay inside a burning van or risk getting out into a hostile crowd. This was a terrible decision for them to make,” he continued.

“These are officers who come to work every day to serve and protect the public. Their victim impact statements are powerful and show the physical and psychological impact the terrible events of that night have had on them,” he added.