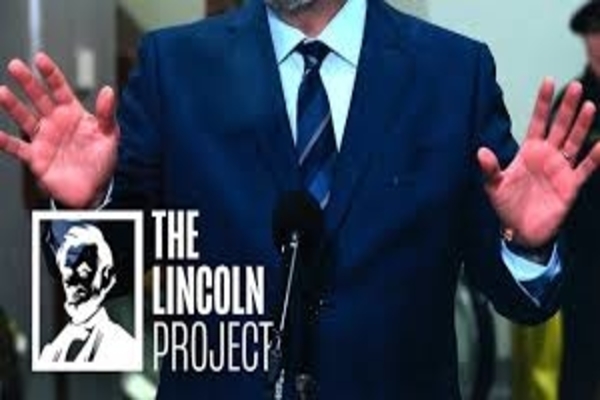 Now that co-founder John Weaver faces unprecedented criticism, facing accusations from 21 men claiming he sent them sexually explicit messages, allegedly offering, in some cases, advice in exchange for sexual favors. One accuser began receiving messages from Weaver as an adolescent he said.

In its prime, the anti-Trump vitriol spewed by the supporters and founders of The Lincoln Project attracting influential progressive figures. Donations of large sums of money were received by some of Hollywood’s highest-profile figures and most influential executives. Stars lending their voices, narrating political ads produced by the embattled group.

The day before the election, the Lincoln Project released an ad narrated by Ford, who heaped praises on Dr. Anthony Fauci, who he said served the American people “tirelessly, honorably, and selflessly.” The ad also featured Trump’s supporters shouting “Fire Fauci” as Trump said, “Don’t tell anybody, but let me wait until a little bit after the election.”

“Tomorrow, you can fire only one of them. The choice is yours,” Ford said in the ad.

Mark Hammil also narrated an ad for the Lincoln Project, focusing on the controversy over counting mail-in ballots coming in after Election Day.

“If he gets his way, many who cast absentee ballots will not have their vote counted. This will deny thousands of troops serving overseas of their most sacred right, stripping the men and women in our military the very freedoms they’ve served and sacrificed to defend,” Hamill said in the ad, concluding that it “cannot be allowed to happen.”

Sam Elliot participated in a Lincoln Project ad in October, speaking about fathers and sons and knocking the Trump administration’s response to the Chinese coronavirus.

“Our dads weren’t perfect, but they did their best to raise us to be good, to be honorable, to be men of family and faith, but above all, they taught us to own up to it when we did something wrong,” Elliott said, ultimately urging people to “vote for Joe.”

On Election Day, The Lincoln Project released another ad narrated by Martin Sheen.

“Good morning. Today is the first day of the rest of America’s life. One day. One day that will one way or the other, change how this country feels about itself. One last push to get the train back on its tracks,” Sheen said in the ad.

“One day that cannot wipe out the last nine months, or the last four years, but can clear a path for a thousand better days ahead. One day, America on a tightrope. One day when the entire world is watching, like a parent in the stands peeking through their fingers,” he continued, urging American to “come on.”

“One day that will now play itself out right in front of our eyes, hour by hour, vote by vote, with history on its shoulders. One day that will change our lives forever. It is November 3, 2020, America. We have one day,” the Badlands actor said.

He “led a secret life that was built on a foundation of deception at every level” and describing him as a “predator, a liar, and an abuser.” The Lincoln Project has pled ignorance following the accusations against Weaver.

“We extend our deepest sympathies to those who were targeted by his deplorable and predatory behavior,” the organization said in a statement. “The totality of his deceptions are beyond anything that any of us could have imagined and we are absolutely shocked and sickened by it. Like so many, we have been betrayed and deceived by John Weaver. We are grateful beyond words that at no time was John Weaver in the physical presence of any member of The Lincoln Project.”

Co-founder George Conway also denies knowing Weaver “very well” despite the fact he co-founded the organization with him and penning an op-ed in December 2019.