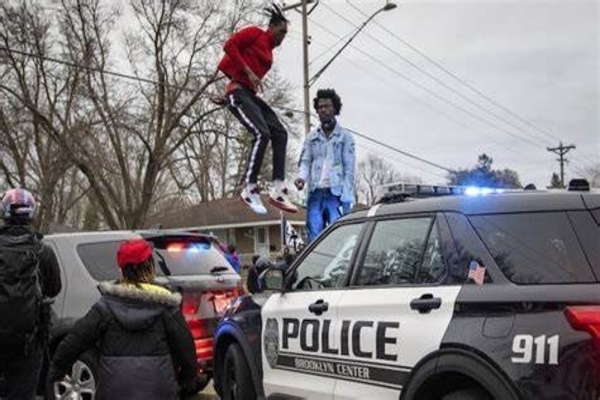 Waltz issued a statement late Sunday night following the shooting that took place at a traffic stop. “I am closely monitoring the situation in Brooklyn Center. Gwen and I are praying for Daunte Wright’s family as our state mourns another life of a black man taken by law enforcement,” he wrote on Twitter.

The mayor of Brooklyn Center, Mike Elliott, also sympathized with the tragic event. “Our entire community is filled with grief following today’s officer-involved shooting of Daunte Wright, a 20-year-old young man. Our hearts are with his family, and with all those in our community impacted by this tragedy…”

Elliott continued, “While we await additional information from the BCA, who is leading the investigation, we continue to ask that members of our community gathering do so peacefully, amid our calls for transparency and accountability”:

Wright’s death sparked about 500 rioters who charged the police station, throwing rocks and vandalizing police cars. The National Guard was called to protect the police precinct and disperse the crowd. The rioters then turned to looting local businesses:

The Star Tribune reported: “Officers repeatedly ordered the crowd of about 500 to disperse as protesters chanted Wright’s name and climbed atop the police headquarters sign, by then covered in graffiti. Police used tear gas, flashbangs, and rubber bullets on the crowd.”

In a statement, the Brooklyn Center Police Department said the “officers determined that the driver of the vehicle had an outstanding warrant. At one point, as officers were attempting to take the driver into custody, the driver re-entered the vehicle.”

“One officer discharged their firearm, striking the driver. The vehicle traveled several blocks before striking another vehicle. Officers in pursuit and responding medical personnel attempted life-saving measures, but he died at the scene, the department said.

The Daily Caller reported that Wright was on the phone with his mother during the occurrence, who said she heard the police warn her boy, “Daunte, don’t run.”