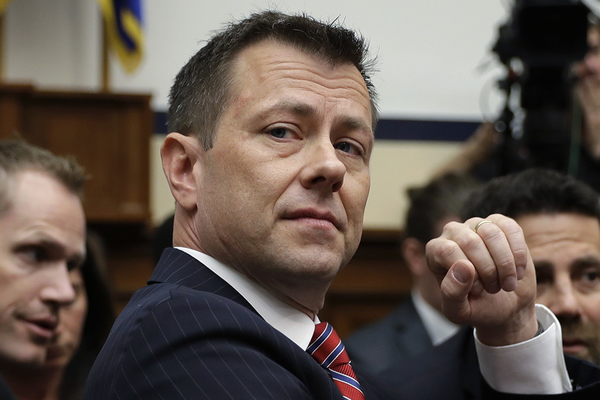 As the report notes, that was the date FBI was tipped off by Australian diplomat Alexander Downer about a conversation in a bar with Trump campaign aide George Papadopoulos, who had suggested that Russia might have Hillary Clinton’s missing emails.  (Hillary Clinton and her aides had deleted tens of thousands of emails from her time as Secretary of State, which she had housed on an illicit private server at her home.  Then FBI Director James Comey recommended against her prosecution.)

Inspector General of the Department of Justice (DOJ) report in December 2019 claimed that the FBI opened its investigation into the Trump campaign, known as Operation Crossfire Hurricane, on July 31, 2016, three days after receiving the Downey tip.

However, the Strzok text, written to FBI lawyer Lisa Page- with whom he had an affair- suggests that the FBI had already opened “investigations,” plural, on supposed connections between Trump and Russia, none of which ever turned up any evidence.

The so-called “Russian dossier,” which later served as a basis for the FBI’s surveillance warrants from the secretive FISA court, prepared by former British spy Christopher Steele, using a sub-source who was himself a suspected Russian spy. The lawyer that arranged the research was Marc Elian, who represented Democrats in election lawsuits nationwide in 2020, wanting the expansion of vote-by-mail, which played a significant role in President-elect Joe Biden’s win.

Declassified intelligence by the government in September showed Russian intelligence believed Clinton approved a plan on July 26, 2016, to claim Trump was compromised by supposed ties to Russian interference in the 2016 election.

The new Strzok texts reveal that journalist Carl Bernstein, who helped expose the Watergate scandal in the 1970s and is a regular guest on CNN, told the FBI’s Office of Public Affairs that he received the “dossier” from Sen. John McCain (R-AZ).

Last year, DOJ Michael Horowitz told Congress that he did not uncover evidence that Operation Crossfire Hurricane was opened because of political motives. However, Attorney General William Barr disagreed at the time.

Barr quietly elevated U.S. Attorney John Durham to Special Counsel in October.  Durham had more access to evidence through its ongoing grand jury investigations in Operation Crossfire Hurricane that Horowitz did through the Inspector General’s investigation.