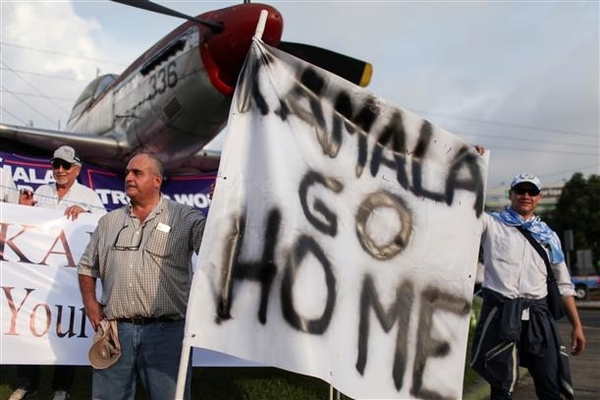 Vice President Harris was greeted by protesters in Guatemala, telling her “Trump Won” and “Go Home” as the country’s president blamed President Biden for this year’s migrant crisis.

The rally was visible to Harris’s motorcade as she met with Guatemala President Alejandro Giammattei one day after blaming the US for luring his constituents north.

“Kamala, Mind Your Own Business,” another sign said, according to a pool report.

Another prominent sign set up by activists features a doctored photo of a pregnant Harris. The poster read, “Guatemala is pro-life #momalahelpme.” Harris does not have biological children.

Another sign that appears to have been hoisted by activists onto a tall billboard along the roadway says, “Kamala Stop Funding Criminals #FueraDeGuatemala.”

It’s unclear how many participants were involved in the protest.

Giammattei said in a CBS News interview Sunday that the Biden administration is to blame for sparking the migration crisis.

Giammattei noted he and Harris “are not on the same side of the coin” on migration.

Republicans, especially local lawmakers living along the border, have called on Harris to visit the area while she is in Mexico.

Yet, the White House has confirmed that she will not be visiting the US side of the border during the trip.