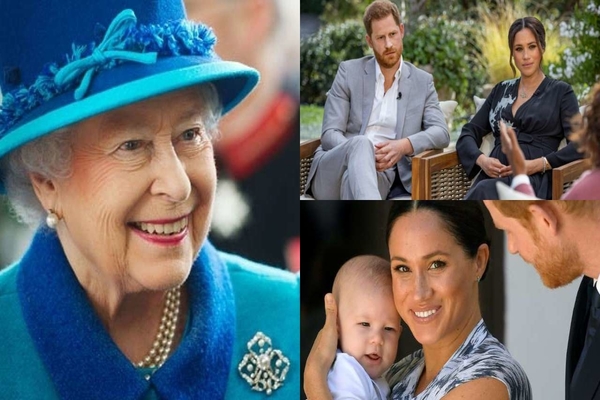 Buckingham Palace criticized claims made by Meghan Markel in her Oprah interview.  Sympathy was expressed, but her versions of events were in question.

In a message published by Buckingham Palace on behalf of Queen Elizabeth II, the monarch said Harry and Meghan remain as “much-loved family members.”

In response to Meghan and Harry’s claims made in an interview with Oprah Winfrey, the Queen said the “issues raised, particularly of race, are concerning.” They would be “addressed” privately, but the Queen made clear that she did not recognize the events as Duchess Megan described, noting some recollections may vary.”

The palace remarks come days after headlined generated by Meghan’s and Prince Harry’s interview with Oprah Winfrey.  It is the first interview since relocating to the United States.

Severe allegations and the royal family were released in the two-hour tape by Mehan.  The claim arising about questions regarding her unborn child’s skin color, the dutchess implying her son was not made prince because of prejudice.  He would be a Lord, not a Prince, because of the century-old royal protocol to the monarch’s great-grandchildren.

Were the Queen to pass away and her son — Prince Charles — to take the throne, Archie would be a grandson, rather than great-grandson, of the monarch and entitled to be a British royal prince.

“In those months when I was pregnant — we have in tandem the conversation of, he won’t be given security, he’s not going to be given a title, and also… concerns and conversations about how dark his skin might be when he’s born”, Meghan told Oprah.

Today’s reply to the claims, implying Meghan may have misremembered certain events, are remarkable as the British Royal Family rarely — if ever at all — replies to claims made about it in the press, whether they are true or not. This studied neutrality, which also extends to the Queen not making her views known on matters political, is part of the monarchy’s efforts to remain above the ebb and tabloid opinion flow.

They rarely, if ever, respond to news stories at all, even when they are incorrect.

Ironically, this is one of the things Meghan told Oprah she was upset about. She expected the palace to defend her like a celebrity’s PR shop, issuing endless corrections to every negative tabloid story.

But the “firm,” as members of the royal family call the institutional monarchy, doesn’t operate that way. This is nothing new. King Edward VII’s daughter reportedly kept a scrapbook of all the inaccurate newspaper articles written about her family that she titled “Things We’ve Never Said or Done.” None of this Edwardian fake news was corrected by the family at the time. The scrapbook was the princess’s way of letting off steam.

…the British royal family doesn’t believe in responding to every bit of bad publicity. To do so would not only be an exercise in futility, it would cheapen them… This is something Meghan doesn’t seem to grasp. But it is this very reticence on the part of the royal family that makes Meghan and Harry’s bombshells so cruel.