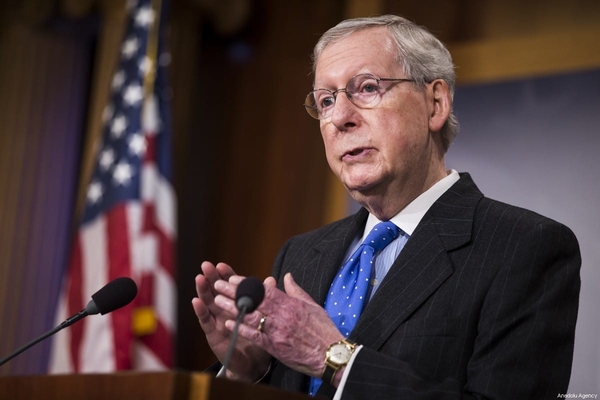 After the vote which approved the raising of the debt ceiling, Schumer was “confronted” by Sen. Jon Thune (R-SD), and Sen. Mit Romney (R-UT) for a belittling speech towards Republicans Politico Playbook reported.

“Republicans played a risky and partisan game, and I am glad their brinkmanship didn’t work,” Schumer said in his remarks, blasting Republicans. “Today’s vote is proof positive that the debt limit can be addressed without going through the reconciliation process, just as Democrats have been saying for months.”

Media reports on the incident show Manchin putting “his head in his hands as he listened to Schumer’s tirade”:

Manchin reportedly said that “[Schumer] felt charged up and [they] had good conversation,” adding, “We have to deweaponize, you can’t be playing politics, reported the Daily Mail.

“I’m sure Chuck’s frustrated, but that was not a way to take it out. We just disagree. I’d done it differently,” Manchin reportedly said. “Civility is gone.”

Sen. Susan Collins (R-ME) reportedly “chased” Schumer into the cloakroom to “chew him out.”

“Listen, they kicked our ass, and we have no one to blame but ourselves,” Graham said.

The drama follows the Senate vote to raise the debt ceiling by $480 billion after 11 Republicans voted for the increase. The debt ceiling will be extended until December, when they will again have to battle it out.

Presumably, McConnell’s decision was over concerns that Manchin and Sinema would eliminate the filibuster to increase the debt ceiling. McConnell reportedly argued that if Democrats were allowed to raise the debt ceiling with a definite number, it would have negative results in 2022.