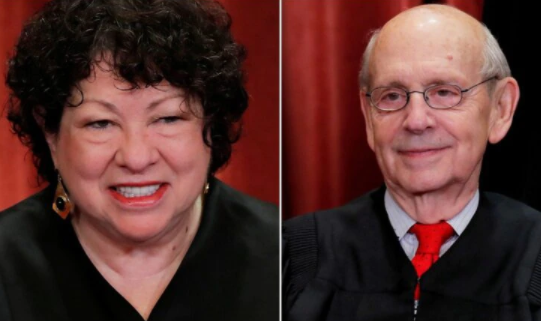 (Big League Politics) – The robed lawyers on the Supreme Court have been embarrassing themselves all day while hearing the oral arguments of crucial case on vaccine mandates.

The case will determine whether or not the Occupational Safety and Health Administration (OSHA) has overstepped its authority in implementing a vaccine mandate on private businesses with over 100 workers. While it should be obvious that this mandate is outrageously unconstitutional, the brain trust on SCOTUS does not necessarily see it that way.

The most insanely idiotic comments come from the “wise Latina” Sonia Sotomayor, the far-left Obama affirmative action appointee to the bench:

“Why is a human spewing a virus not like a machine spewing sparks?” Sotomayor asked. The Republic is doomed. #SCOTUS

Here is Justice Sotomayor saying that "hospitals are almost all full capacity" and there are "over 100,000 children" hospitalized with covid "many on ventilators.

None of those things are true. Not even close. pic.twitter.com/MqWEL2UvJg

Justice Robert Breyer’s comments were not far behind those of Sotomayor in terms of tone-deaf stupidity:

There are 330 million people who live in America which means everyone apparently got covid twice in the last 24 hours. pic.twitter.com/rzMf8OzAlj

Trump’s SCOTUS pick, Amy Coney Barrett, showed her lack of willingness to protect the Constitutional rights of the people during the proceedings as well:

Barrett's questions seem to suggest that she may think the #OSHA rule is too broad but a more-tailored rule may be okay. Also suggests that (as we talked on the blog) the Court may rule differently on the #OSHA and #CMS mandates. /40

However, there was some sanity from the more conservative justices serving on the bench, such as the civil libertarian Neil Gorsuch:

JUSTICE GORSUCH: "Congress has had a year to act on the question of vaccine mandates… Now the federal government is going agency-to-agency as a workaround to its inability to get Congress to act." pic.twitter.com/FbLvd7tBBt

Justices Samuel Alito and Clarence Thomas similarly made some arguments poking holes in the supposed necessity of a federal vaccine mandate as well:

Alito: These vaccines have benefits and risks, and some people who take these vaccines will face adverse risks, right?

Alito: I'm making the point there is a risk, some risk, with the vaccines. In that way, this is not like OSHA mandating a hardhat, right? https://t.co/w3kqYKD5eG

Justice Thomas: "Is a vaccine the only way to treat COVID?"

Solicitor General Prelogar: "It is certainly the single most effective way." pic.twitter.com/Tz1WieoVrQ

Big League Politics has reported on how this gaggle of unelected attorneys regularly sells out the rights of the American people to protect the system that handed them such gilded prestigious positions:

“The Supreme Court (SCOTUS) has opened the door for public schools to adopt transgender insanity on a grand scale by denying a crucial case that would have protected children from this psychotic agenda.

On Monday, SCOTUS rejected Gloucester County School Board v. Grimm, and legal analyst Margot Cleveland explained that this will allow public schools to aggressively implement the promotion of transgenderism as official policy.

Cleveland wrote in her analysis for The Federalist that SCOTUS ruled in R.G. & G.R. Harris Funeral Homes v. EEOC (2020) by a 6-3 margin that transgender discrimination is illegal under Title IX law. However, SCOTUS essentially punted in this ruling on defining what exactly constitutes transgender discrimination. Grimm could have provided the court with the opportunity to establish a framework that would keep LGBT predators at bay.

She wrote that “while the Supreme Court may see no urgency in the resolving the legal questions at issue, while the justices sit on the sidelines, the privacy rights of children (and adults) are at risk, as are parental rights, the right to free exercise of religion, and the right to free speech—which also includes the right not to be compelled to speak, even when the forced speech concerns pronouns.”

It was only Justices Samuel Alito and Clarence Thomas that wanted to hear Harris Funeral Homes. The rest of the justices, including Trump picks Brett Kavanaugh and Amy Coney Barrett, voted to punt on the issue and enable transgenders to target school children.“

There is nothing supreme about this court. They have looked the other way throughout America’s transformation from a constitutional republic into a socialist despotism. A betrayal on the brazenly illegal OSHA mandates would be arguably the court’s most egregious disgrace to date.