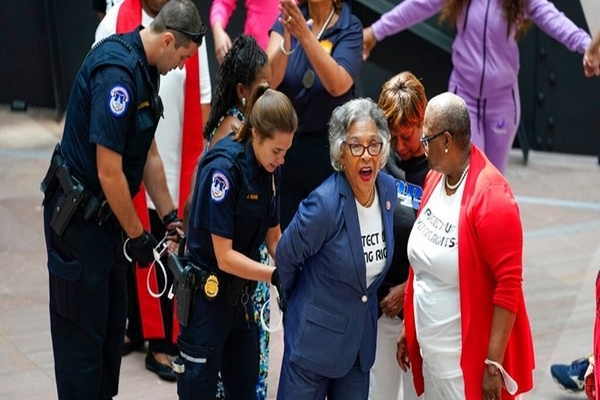 The Capitol Police arrested Rep. Joyce Beatty (D-OH) and others as they lead a protest in the Hart Senate Office Building on Thursday.

Brown told ABC News that she and other activists had been invited to meet with VP Harris to discuss voting rights on Friday afternoon.

Politico reporter Nicholas Wu tweeted a photo of Beatty’s hands being zip-tied by Capitol Police officers. Later a video of Beatty was shared on Twitter as she stood with other activists chanting, “end the filibuster!”

Beatty, head of the Congressional Black Caucus, shared photos on her Twitter account stating she and others were “marching to the Senate to send a strong message” about voting rights for black women.

Just ten minutes later, Beatty’s account shared images of her hands secured behind her back while being escorted from the Senate building.

“You can arrest me. You can’t stop me. You can’t silence me,” Beatty wrote on Twitter after her arrest. Beatty and around 20 protesters demonstrated while asserting putting pressure on senators to pass voting rights legislation.

The Capitol Police released a statement to Fox News in the wake of Beatty’s arrest, saying, “nine people were arrested for demonstrating in a prohibited area on Capitol Grounds.”

“At approximately 3:30 pm, the United States Capitol Police responded to the Atrium in the Hart Senate Office Building for reports of illegal demonstration activity,” the statement reads. “After officers arrived on the scene, they warned the demonstrators three times to stop. Those who refused were arrested for D.C. Code §22-1307. Two males and seven females were transported to USCP Headquarters for processing.”

Beatty’s use of the word “fight” could mean several things for Democrats. When former President Trump used the word “fight” to signal a change in politics and elected leaders, Democrats accused him of leading an insurrection. Democrats played an edited video of his speech from January 6, 2020, in the impeachment trial. They deceptively left out his call for “peacefully and patriotically make your voices heard” from his supporters.