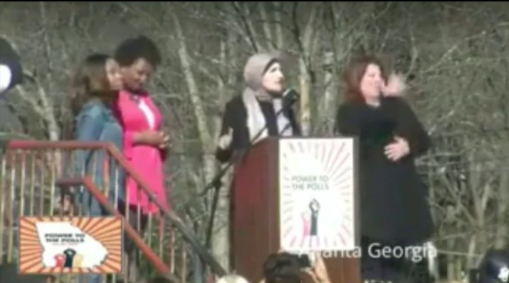 Gubernatorial candidate Stacey Abrams posed with Linda Sarsour in a picture Congresswoman Marjorie Taylor Greene recently brought to public attention. In a tweet, Congresswoman Marjorie Taylor Greene stated, “Get ready Georgia, Stacey Abrams wants to be Governor of our state and will be depending on her friend like Linda Sarsour, who organized the Women’s March and raises money for Islamic terrorists. These women do NOT represent our Georgia values!”

Stacey Abrams, famous for her leftist activism, tweeted out this picture herself in 2018. Not surprisingly, the mainstream media didn’t find this the least bit objectionable. As with Obama’s Farrakhan picture, the mainstream media finds left wing associations with radicals to be acceptable.

Sarsour is on record making very troubling statements. Among her radical comments were calling for a form of Jihad against President Trump and saying in the same speech, “here in these United States of America, where you have fascists and White Supremacists and Islamophobes reigning in The White House.”

Sarsour has implied on numerous occasions that America is a place of white supremacy. She also has a history of antisemitism. In addition she has frequently accused her critics of being Islamophobic without any evidence to that effect. She is also a member of Democratic Socialists of America.

Marjorie Taylor Greene, in reminding the public about this picture of Stacey Abrams with Sarsour is doing the public a major service. Yet again conservatives are forced to do the job the mainstream media refuses to do-hold the powerful accountable.