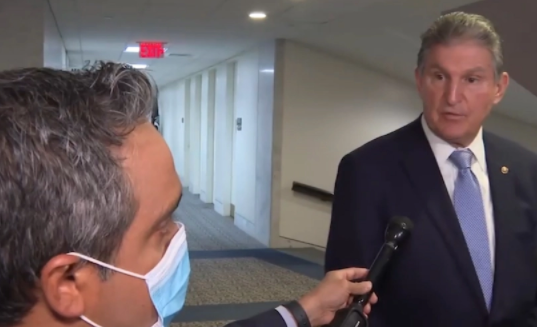 (The Post Millennial) – Sen. Manchin got into it with reporters on Wednesday as they grilled him on his actions regarding Biden’s massive spending package.

Senator Manchin has long stated that he does not fully support the child tax credit portion of the Biden administration’s multi-trillion dollar spending package. While he has expressed concern and a desire to amend it, complete abolition has not been on the table.

In recent days, however, rumours have surfaced claiming that Sen. Manchin is considering letting the child tax credit expire.

On Wednesday, while walking in the Capitol subway, the Democrat senator was stopped by reporters and berated with questions about his stance on the issue.

Nonetheless, the reporters persisted. As The Hill reports, Huffington Post Politics’ Arthur Delaney asked Sen. Manchin whether debate over the child tax credit has hindered progress on the Biden administration’s bill. Delaney then asked whether Sen. Manchin would support the $300 monthly payments to families with young children.

The senator, now visibly flustered, lashed out at Delaney and the group of reporters. “Guys, I’m not negotiating with any of you all,” he said. “You can ask all the questions you want. Guys, let me go. This is bullshit. You’re bullshit!”
He was heard cursing, “God almighty,” as he walked away.

Tensions have been rising within the Democratic Party as the deadline to pass President Biden’s Build Back Better plan looms near. Sen. Manchin has been singled out as one of the Democrats whose cooperation is essential for the bill to pass, thus the child tax credit issue may put the party’s plans in jeopardy if a consensus is not reached soon.