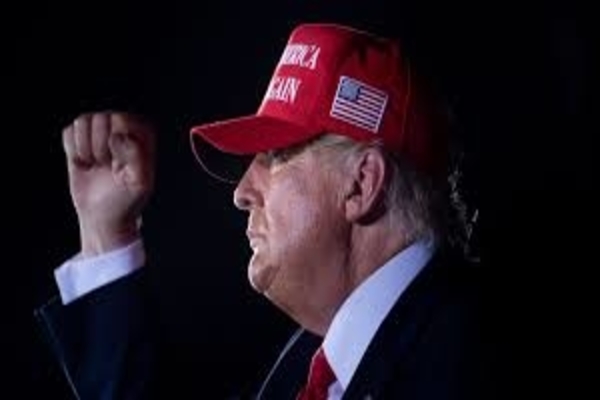 (Breitbart) – Former President Donald Trump told Breitbart News exclusively that the United States of America is “much weaker now” under Democrat President Joe Biden’s leadership and that the world does not “respect” America anymore, thanks to that weakness.

“We’re not respected anymore,” Trump said in an exclusive interview on Breitbart News Saturday on SiriusXM 125 the Patriot Channel.

“I really think if you look at the border, it’s really terrible and a terrible thing to watch. I look at it from other countries with millions of people pouring into our country totally unchecked, unvetted,” Trump continued. “Millions of people, they’re dumping their prisons—other countries—into our country. They’re just coming in at will. We had the strongest border in history. Now, we have the weakest by far in history. But I think that the Afghanistan pullout or surrender or whatever you want to call it has totally weakened us in the eyes of our nations. It has totally weakened our country. Our military is great. Our generals are great, except for our television generals; they don’t know what the hell they’re doing. But I’ll tell you, I really believe that that whole Afghanistan disaster was, nobody really believes it. It’s so hard. Our country feels so low right now. It’s never been so embarrassed. When they see that, China, you know, is watching that very closely. So is Russia and North Korea and Iran. Iran looks at that, and they say, ‘You know, what do we have to deal with these people for?’ They won’t even talk to us. They were ready to sign a deal. They would have signed a deal with me within one week after the election—which turned out to be rigged. It was a rigged election. And that’s what we get for it. So it’s one of those things. It’s a terrible thing. I don’t think our country has ever been thought of more badly than it is right now.”

Trump hammered the Biden economy as well, noting that Americans are being forced to spend much more this holiday season for presents and travel to see family—all of which is Biden’s and the Democrats’ fault.

“They’re spending a lot more also because they can’t get anything,” Trump said. “They can’t buy the things that are being shipped from other countries. They can’t buy presents. They can’t do anything. I’m hearing stories that are horror shows where department stores are half empty and they don’t have product. Nobody has ever had anything like this. I’ve never seen anything like what’s going on with the shipping of goods.”

He also noted that he and Chinese Communist Party dictator Xi Jinping never had to discuss supply chain shortages and other serious issues because such matters were simply unthinkable just a short time ago before Biden messed things up for America. He also noted a similar dynamic with other world leaders such as Russia’s Vladimir Putin and the Iranians as well, where America’s adversaries now seem emboldened by that Biden weakness he described earlier in the interview.

“We [Xi Jinping and I] never talked about that, and by the way, we never talked about Taiwan because he understood he couldn’t do that, and we had a very good relationship until COVID came in, and then I said, ‘That’s enough of that,’” Trump said. “We made a great trade deal with China for our farmers and our manufacturers and made them rich and took billions and billions—hundreds of billions of dollars—from China. Nobody else ever took in anything. We never talked about Taiwan. We never had a problem with Ukraine in terms of a problem like you have now where there very well could be an invasion. That stuff was not on the table. I got along very great with Putin and with President Xi and all of them. I got along great with Kim Jong-un, but they understand they couldn’t do any of this stuff. Now, they’re doing things that are unthinkable. You look at bombers flying over Taiwan all the time, and I mean constantly major bombers—big numbers of bombers—flying over Taiwan. That didn’t happen with us. They understood they couldn’t do anything about that. And they wouldn’t have, out of respect for me and out of respect for the country. Now, they’re doing it like it’s like on a daily basis. If you look at Ukraine and what’s going on there and you look at Iran—we ended the Iran deal but they would have made a deal with me. Within one week after the election, we would have had a deal with Iran. Now, it’s just terrible. They’re heading toward a nuclear weapon.”

During the course of the interview, Trump also said he would not engage in a full boycott of the 2022 Winter Olympics in Beijing because he said that would hurt the athletes—but also said that Biden’s “diplomatic boycott,” where he is not sending any diplomats who were not invited anyway to the games, is not strong enough to hold China accountable, either.

“Or go and do a lot of things that are much more severe,” Trump said when asked if he would withdraw the U.S. entirely from the Beijing games. “You know, you hurt the athletes. Jimmy Carter tried a bigger version of that, and it was a big failure. I think that there are many things we can do that are much more powerful than that. That sends a double signal. It also sends a very negative vibe. No, I don’t think I’d do it. I think it’s unfair to the athletes, and I think it’s unfair in many ways to a lot of other countries. I would not do that. I would do other things that are more powerful than that. But it was done before, and it didn’t work. That was under Jimmy Carter, who now goes down as the second-worst president.”

Trump appeared on the show for the interview, recorded on Wednesday afternoon, to promote his new book Our Journey Together, available at 45books.com, a collection of photographs from his four years as president.

“It’s mostly beautiful pictures of our time. We had four great years. We did a lot despite the witch hunts and the scams that were going on, the fake impeachments,” Trump said of the book. “We did a lot. We rebuilt our military. We cut taxes at a level that has never been done before. We cut regulations, Space Force, just so many different things. We had a great economy. We had no inflation. We had low energy prices. We were energy independent. So with all of that, we had an amazing time and a lot of other things beyond that. If you think about from a medicine standpoint, Right to Try, people who are terminally ill were not allowed to get medicine that was under development, and now, they can get medicine, and it’s really saved a lot of lives already. So many different things, so we thought we’d put it in pictures, and we did. We put it in pictures. It’s really a photo album more than anything else, and we have comments to many of the photos. But it’s a photo album, and we did it for the reason that people are very unhappy right now, and the country has never been so embarrassed. They’re embarrassed like never before by that Afghanistan pullout, which was such a tragedy the way they got out. Not getting out—I got them down to 2,500 soldiers and we were getting out with strength and dignity, but the way they surrendered and gave all of that equipment and $35 billion and thirteen young soldiers, beautiful soldiers, killed, and leaving American hostages behind. It’s just incredible. I don’t think our country has ever been lower in terms of world esteem than it is right now.”

Asked what his favorite photograph in the book is, Trump named a few, including some family pictures and some with world leaders.

“I have a lot of family pictures and pictures with Melania and pictures with the kids and pictures with a lot—I think some of the very important ones are with the heads of China and many of the heads of Russia or France,” Trump said. “But the one with Kim Jong-un of North Korea, that was very historic because nobody had been there before. We got along great, and we had a good relationship. Frankly, Obama thought we were going to go to war with North Korea, and we never did. We saved that. We had a very good relationship. That was nuclear stuff; that was dangerous. That was very historic. A lot of the pictures I think are really very historic. We had an amazing four years despite the Democrats trying to make it as difficult as possible.”

Trump said he will continue to be active in endorsing future Republican leaders and described, too, what he is looking for in candidates—in a phrase, “America First,” he said.

“We’re winning with almost all of them. We’re 158 and 2,” Trump said when asked about his endorsement process for candidates; “158 wins and two losses. The two losses, they were more Trump than—they were tougher in terms of Trump than the two people I endorsed. We’re 158-2. I would say this: it’s very simple, America First. We want great schools. We want to do, as an example, choice—which is very important. We want great education. We want great military. We want great Second Amendment protections. We want all of the things you would think. We want low taxes. We want low regulations. But we want to put America First, America before these other countries who were eating our lunch. I then turned that around, and now, they’re going crazy what they’re doing to this country. That includes Europe. That includes China. That includes everybody. Look at what’s happening with Russia. I ended their pipeline, the biggest thing they’ve ever done. Biden approved it right away. We want people who are going to be strong, tough, and smart, and America First.”

Trump just hired Rep. Devin Nunes (R-CA) as the new CEO of Truth Social, his effort to take on the Big Tech oligarchy, and told Breitbart News he considers Nunes a “fighter.”

He’s a fighter,” Trump said when asked about Nunes. “He was a fighter right from the beginning. When I first met him, he was looking under the White House into deep files for all of the different things on the Russia hoax. He knew it was a hoax, and he understood it earlier than anybody. He’s tough. He fights like nobody fights. I just thought it would be a great idea. He loved it. He’s giving up a very important position because I think the Republicans are going to do very well in 2022 and very well in 2024. But I think Devin is going to be a very important person in this country when he takes on the Big Tech.”

At the end of the interview, too, Trump did not explicitly say he was running for president again in 2024, but he strongly hinted toward a comeback bid in the next presidential contest. In those comments, too, Trump lambasted leftists for attacking Breitbart News advertisers in an effort to silence and cancel this publication.

“I know you well, and Breitbart is terrific, and we have to stop them from doing what they’re doing with your advertisers, and all of these people play tough,” Trump said when asked about his future plans and if he is any closer to announcing his decision about running for president again. “They are a disgrace to our nation. But I’ll tell you what: I’ve known you and Breitbart right from the beginning, and you’ve been fantastic. I really believe you will be extremely happy.”