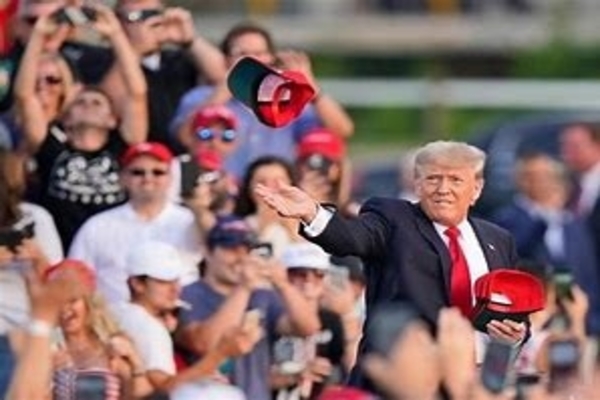 Former President Trump urged his supporters to vote for “America First” Republicans, not RINO’s (Republican in Name Only) in congressional midterms, during his return to the rally stage in Ohio on Saturday.

There was a renewed urgency in the former President’s rally speech; he outlined Biden’s failures in office.

“The number one priority for everyone who wants to save America is to put every ounce of energy into winning a victory in midterms and 2024,” he said.

“Every single Republican needs to vote him out of office,” Trump said, calling Gonzales a “grandstanding RINO.”

A massive political reset in the 2022 midterms was called for after Trump criticized Biden’s policies and Congressional Democrats.

“You have to deliver massive majorities for Republicans in Congress next year, have to do it,” he said.

Trump’s supporters were thrilled with his reading of the poem “The Snake,” describing the illegal immigration threat.

“In the Republican party, we do not believe that we should welcome criminals with open arms,” he said.

The Democrats used the coronavirus pandemic to “steal the election,” declared Trump, calling on his supporters to rally in the midterms.

“With the help of everyone here tonight and patriots across the country, we will do all that we are supposed to be doing and much more when we win giant republican majorities next year,” he promised.

Trump did not endorse a Republican candidate in the 2022 Ohio Senate; instead, he took a “poll” asking for cheers for either Jane Timken, Josh Mandel, or Mike Gibbons.