(Big League Politics) – Tensions have continued to build as further Russian encroachment on Ukrainian territory dominates global headlines, with many expressing hysteric fears of an imminent beginning to a World War III.

Joe Biden has remained a historically unpopular president, so much so that averages of current surveys by liberal pollster FiveThirtyEight show Sleepy Joe’s approval rating at a pathetic 41.7%. Meanwhile, 53.4% of respondents reported disapproval of the senile White House occupant.

The numbers were telling. Of the 1,504 United States service members surveyed, 79% indicated that they believe Biden has not done enough to deter Russian invasion of Ukraine. 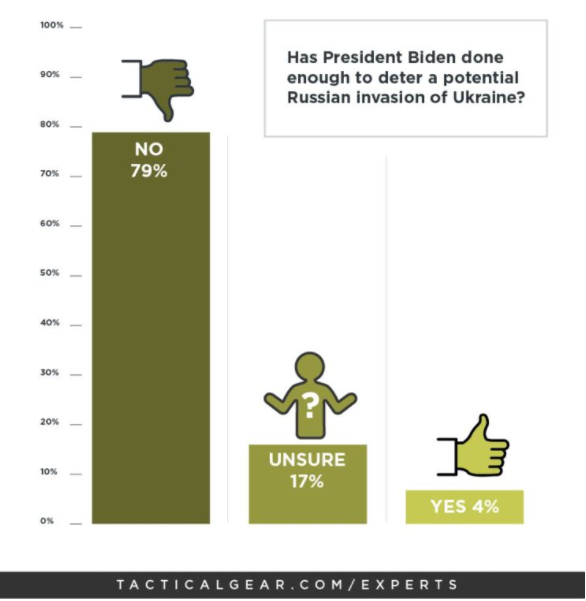 There is also little faith in the competence of the senile White House occupant; over 73% of those polled said they are “very unconfident” in Joe Biden’s ability to handle a military conflict with Vladimir Putin. 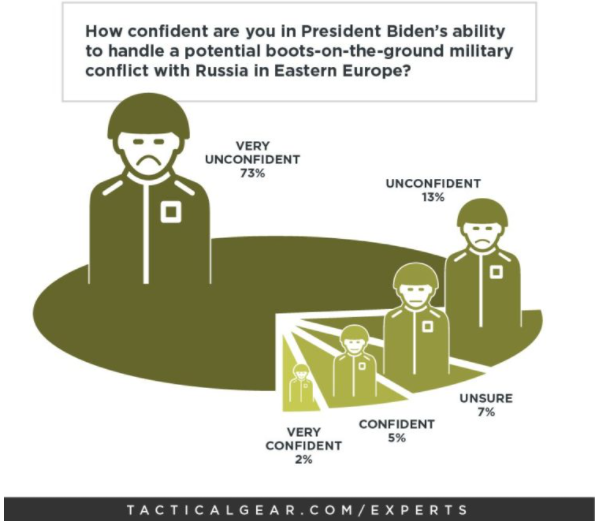 Tactical Gear explained the methodology for their polls:

In total, 1,776 individuals took part in the survey. Of those, 272 selected that they have not served in the United States Armed Forces; their results were excluded from the data. The survey questions we analyzed were:

– Do (or did) you serve in the United States Armed Forces? If so, which branch?

– How effective have President Biden’s foreign policy initiatives been in addressing and mitigating international conflicts?

– Has President Biden done enough to deter a potential Russian invasion of Ukraine?

– How likely is it that Russia invades Ukraine?

– If Russia invades Ukraine, should the United States assist Ukraine?

– What do you think the likelihood is of an armed conflict between Russia and the United States?

– If Russia invades Ukraine, how likely is it that the United States will deploy troops to the region?

– How confident are you in President Biden’s ability to handle a potential boots-on-the-ground military conflict with Russia in Eastern Europe?

WATCH: Pelosi SNAPS… She NEVER Wanted This to Go Public

WATCH: Pelosi SNAPS… She NEVER Wanted This to Go Public