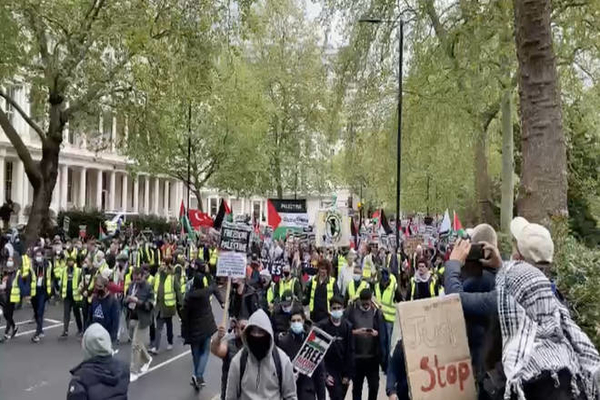 Criticism for the Metropolitan Police emerged after the online footage, showing a female officer shouting a pro-Palestinian chant during an anti-Isreal protest.

The female officer is seen in the clip hugging a female protester before shouting, “free, free Palestine.”

Extended footage shared on YouTube shows the officer saying that she would be joining the protest if she “wasn’t in this uniform.”

The officer said she was from Iran, prompting a protester to reply: “You’re from Iran? You should be joining us; what are you doing, you’re one of our people; come on!”

In a statement of response from the Met: “While officers are encouraged to positively engage with those attending demonstrations, they know they are not to actively participate or adopt political positions.

“This is vital to ensuring the public have confidence in our officers.”

The police confirmed that the Directorate of Professional Standards had been informed about the video and will launch an investigation into the “full circumstances of this incident and to determine what further action is appropriate.”

The Metropolitan Police have been criticized for their apparent double standards in policing protests of differing ideologies over the past year.

The Met has been seen taking a hands-off approach to far-left demonstrations such as Black Lives Matter, a more forceful line for right-wing lockdown protests has been taken.

Thousands of pro-Palestine activists gathered outside the Israeli embassy on Kensington High Street, shouting slogans such as “free, free Palestine,” “Israel is a terror state,” and “no justice, no peace.”

The protest ultimately descended into violence as officers attempted to disperse the crowd for violating Covid restrictions.

Nine police officers were injured during the riot, and thirteen activists were arrested.