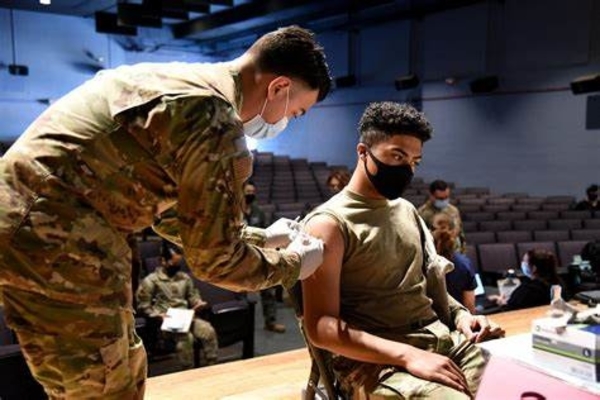 The Biden White House opposes a provision in a bipartisan defense bill that would prohibit dishonorable discharges for military members refusing to get the mandatory coronavirus vaccine.

On September 21, the Biden administration released a Statement of Administration Policy that stated Rep. Mark Green’s (R-TN) provision “would detract from readiness and limit a commander’s options for enforcing good order and discipline when a Service member fails to obey a lawful order to receive a vaccination.”

“To enable a uniformed force to fight with discipline, commanders must have the ability to give orders and take appropriate disciplinary measures,” the White House statement said.

In response Green, an Army veteran and physician, tweeted:

@POTUS is trying to strip out my amendment preventing anything but an honorable discharge for servicemembers who refuse to get the COVID-19 vaccine—an amendment so commonsense that EVERY Democrat on the House Armed Services Committee agreed to it!

Green argued, “Any discharge other than honorable denotes a failure to serve the United States to the best of one’s ability, and it significantly impacts an individual for the rest of their lives — future employment and things of that nature,” at a House Armed Services Committee markup of the bill earlier this month.

He added: “Our men and women in uniform put their lives on the line to serve, and we should not destroy their lives with a dishonorable discharge just for making a personal medical decision.”

Section 716 of the NDAA states:

Notwithstanding any other provision of law, a member of an Armed Force under the jurisdiction of the Secretary of a military department subject to discharge on the basis of the member choosing not to receive the COVID-19 vaccine may only receive an honorable discharge.

The Secretary of Defense shall establish uniform procedures under which covered members may be exempted from receiving an otherwise mandated COVID-19 vaccine for administrative, medical, or religious reasons, including on the basis of possessing an antibody test result demonstrating previous COVID-19 infection.

The Biden Pentagon ordered all service members to be vaccinated against coronavirus in late August.

According to The Hill, on Tuesday, a group of Republican senators announced legislation seeking to prohibit dishonorable discharges for troops that do not comply with the vaccine mandate. The senators included Sens. Roger Marshall (KS), Ted Cruz (TX), James Lankford (OK), and Tommy Tuberville (AL).