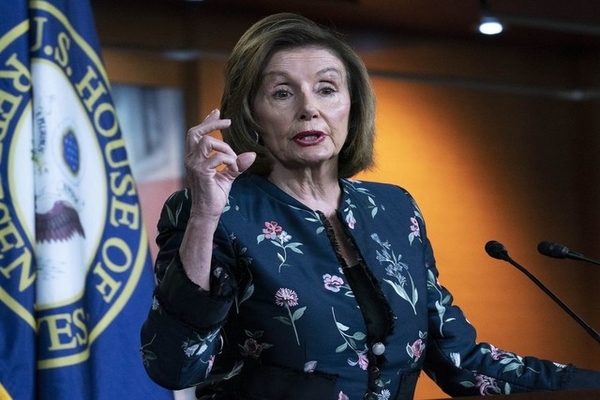 House Speaker Nancy Pelosi (D-CA) has been caught without a mask many times in the U.S. Capitol after threatening to arrest anyone who opposes the mask mandate.

On the first day of the new mask mandate July 28, Pelosi was speaking at the speaker’s podium without her mask wiping her nose with what appears to be a Kleenex while touching the area around her as she gives orders for others to wear “well-fitted” masks.

Pelosi, on July 29, was seen during a Select Committee on Economic Disparity and Fairness in Growth hearing, without a mask again. The mask was around her neck, and she was coughing.

Pelosi, on July 30, was seen during a press conference not wearing a mask while talking to others, touching the podium and her nose. She introduced House Majority Leader Steny Hoyer (D-MD) and stepped to the side.

On the same day, she can be seen removing her mask to take a photo with Rep. Jake Ellzey (R-TX) and his family after his swearing-in. Earlier in the week, Ellzey won a special election to represent Texas’s Sixth Congressional District.

Pelosi was again caught not wearing a mask while inside the Capitol later the same day, in another video published by the Republican National Committee’s (RNC) War Room.

National Republican Congressional Committee Communications Director Michael McAdams tweeted a close-up of Pelosi, noting, “Only one not wearing a mask in this photo is….[Pelosi].” Pelosi seems to follow the trend of not wearing a mask while everyone around is, under the orders she gave with the threat of being arrested:

After Pelosi was spotted the first day with her mask, she resorted to calling House Minority Leader Kevin McCarthy (R-CA) a “moron” for opposing her new mandate, which she does not follow.

The Capitol Attending Physician Brian Monahan advised Congressional members of the staff to wear “well-fitted” super masks. At the same time, inside if “other individuals are present” like the House Office Buildings, the Halls of the House, and House Committee Meetings on Tuesday.

A memo leaked on Wednesday showing that the Capitol Police, under the direction of the Speaker, was directed to “enforce” the company on staff and visitors. The Capitol Police were to warn individuals to either “comply or leave the premises after asked to do so would be subject to an arrest for Unlawful Entry.”

However, any members should be “reported to the House Sergeant at Arms’ office” to be dealt with.