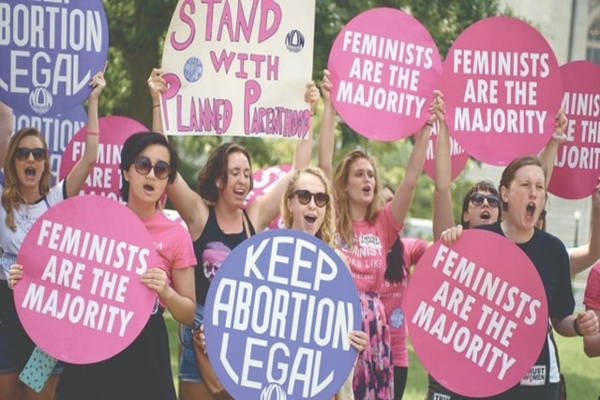 Alyssa Milano, left-wing actress and activist, complained about how “fucked up American is right now,” claiming the Supreme Court is “packed with abusers.” She insists “this is the most dangerous time to be a woman in America” while at an abortion rally.

“I cannot believe how fucked up America is right now,” Milano proclaimed at an abortion rally on Saturday in Los Angeles, where she shared her dismay over the pro-life law — which bans most abortions after six weeks of pregnancy — enacted in Texas last month.

“I can’t believe how a handful of men are successfully taking 50 years of rights away from women, and how a Supreme Court packed with abusers is just going to sit by and let it all fucking happen,” Milano said.

She then directed her rage to men while asking what the fuck are you going to do” to help advance the pro-abortion movement in America.

“Women are under attack almost entirely by men. What the fuck are you going to do about it?” Milano asked. “It’s great that you’re here. Thank you so much for being here. But please don’t mistake marching — showing up for a single event — with being an effective ally in this fight.”

“You need to take action and keep taking action until this is all fixed,” the Alyssa Milano Sex Tape actress affirmed.

Milano dressed as a Handmaid’s Tale character in 2018 while protesting Judge Brett Kavanaugh’s nomination to the U.S. Supreme Court, then called on men to “use your privilege to destroy your own privilege.”

“It is time for the president and the leaders in Congress to enact the Equal Rights Amendment. They need to do it fucking now,” she said. “This is the most dangerous time to be a woman in America,” Milano said near the end of her speech, echoing the sentiments she shared at the Variety Power of Women event in Beverly Hills on Thursday.

Milano is not the only celebrity to be enraged over the pro-life law in Texas.

Stars including Michael Moore, Amy Schumer, Julia Loius-Dryfus, Dave Bautista, and Amy Brenneman have called the Republican lawmakers in Texas the “Texas Taliban” while accusing them of enacting “sharia law.

All while, actress Bette Midler has called for a sex strike, urging “all women refuse to have sex with men” in reaction to the Texas law.