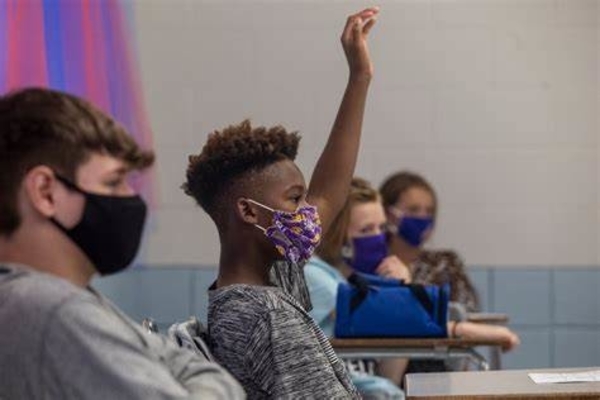 Teachers in the Colorado Springs school district are forcing middle students to wear masks by taping them to their faces.

Over 100 students and staff members will be interviewed by Academy School District 20 to investigate the credibility of the allegations after a photo of a Chinook Trail Middle School sixth-grader with a mask taped to her went viral.

Stephanie Butler, the student’s mother, told Fox21 the photo was posted online to determine if other parents were aware of the mask policy and if other students were impacted. According to Butler, her daughter sent her the photo in which she was wearing a mask with tape on it, leading to Butler’s inquiry.

Butler explained that her daughter received only one warning to keep her mask above her nose before she had the mask taped to her face. Additionally, according to the sixth-grader, her teachers have been enforcing the new policy for weeks.

“It’s a type of a restraint to me,” Butler added. “With the mask mandates and everything … she likes them because they hide her face cause of acne or whatnot. What really made me sad was that she didn’t see what was wrong.”

“Your face is you, you know — that’s how people know you. They are just doubling down on hiding you and not letting you breathe. It’s conformity to the extreme,” said Butler.

Similar stories have been reported by other parents. Tori Skeldum, a parent of an 11-year-old at the middle school, told Fox21, “[my daughter] said the teachers were wearing the masking tape around their wrists like bracelets, and whenever someone’s mask would fall down, they would tape them.”

The school district said in a statement, “currently, we do not have concrete findings. As we know more, we will keep our community apprised. We thank our community for their patience and support as we take the appropriate steps to address these serious allegations.”

Parents were also sent an email from the district regarding the situation on Monday.

Tom Andrew, Chinook Trail Middle School Principal, reportedly asked to meet with Stephanie Butler and her daughter. However, she declined the requested meeting; instead, she opted to seek advice from legal counsel.