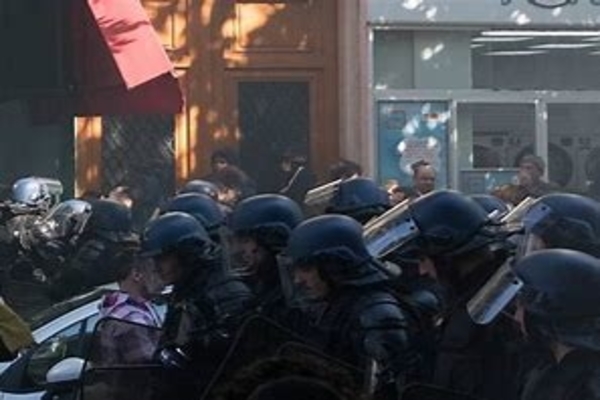 The fifty members of Portland’s police riot squad have resigned, protesting charges of an officer who allegedly hit an independent journalist during a Black Lives Matter riot in August 2020.

Activist Teri “Jacobs was not charged with any crime and was awarded a $50,000 settlement by the City of Portland over the incident,” the Daily Mail first reported. “Jacobs says she was attacked despite carrying a press card.”

In a statement, the Portland Police Association defended the charged officer stating that the night “escalated” and “was declared a riot; community members and police officers were at risk of serious injury, and someone from the crowd launched a Molotov cocktail into the Multnomah Building, setting it ablaze.”

“After nearly 75 consecutive nights of violence, destruction, and mayhem, a small group of RRT officers — including Officer Budworth — were again tasked with dealing with the riot,” the Associated continued. “Per PPB Command Staff orders, RRT officers cleared the rioters from the area to allow the Fire Bureau to extinguish the blaze.”

“Once the full picture is revealed, we are confident that justice will prevail, and Officer Budworth will be exonerated of all charges,” the statement conceded.

“Our RRT members do not volunteer to have Molotov cocktails, fireworks, explosives, rocks, bottles, urine, feces, and other dangerous objects thrown at them,” Turner said in a written statement. “Nor do they volunteer to have threats of rape, murder, and assaults on their families hurled at them. They do not volunteer to suffer serious injuries, to be subjected to warrantless criticism and face allegations by elected officials, or to suffer through baseless complaints and lengthy investigations devoid of due process.”

I want to acknowledge the toll this past year has taken on them and their families—they have worked long hours under difficult conditions. I personally heard from some of them today, and I appreciate their willingness to share their concerns about managing the many public gatherings that often were violent and destructive. It is my expectation, and the community’s expectation, that the City remains committed to public safety and effective police oversight. City leaders will continue working in partnership with Portlanders, community organizations, and police leadership to reform our community safety system.

The mayor has reached out for support. The governor said the State Police would deploy its mobile response team to stand by to assist if the need arises over the next few nights.