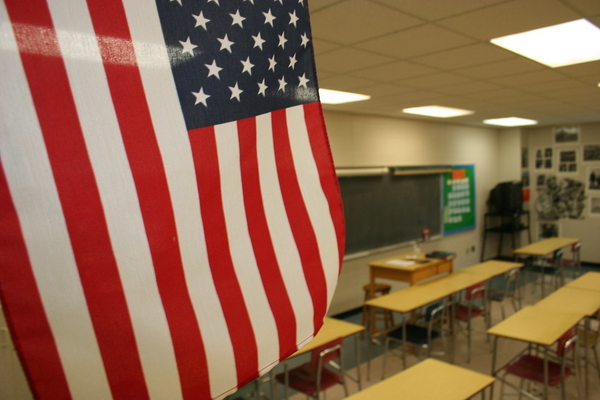 Gov. Ron Desantis (R-FL) requires high school students to learn about “communism and totalitarianism,” ideologies that “conflict with the principles of freedom and democracy essential to the founding principles of the United States,” by signing three civic education bills and HB5.

“It’s crucial to ensure that we teach our students how to be responsible citizens,” DeSantis said during a press conference at a Fort Myers middle school, reported News4Jax. “They need to have a good working knowledge of American history, American government, and the principles that underline our Constitution and Bill of Rights.”

The sad reality is that only two in five Americans can correctly name the three branches of government, and more than a third of Americans cannot name any of the rights guaranteed by the First Amendment. It is abundantly clear that we need to do a much better job of educating our students in civics to prepare them for the rest of their lives.

HB5 provides “Portraits in Patriotism,” a library based on the lives of civic-minded individuals, some of whom have moved to this country after suffering persecution in Cuba and Venezuela.

“We have a number of people in Florida, particularly southern Florida, who’ve escaped totalitarian regimes, who’ve escaped communist dictatorships to be able to come to America,” DeSantis said, reported the Daily Caller.

He added he wants all students “to understand the difference, why would somebody flee across shark-infested waters, say leaving Cuba to come to southern Florida.”

“Why would somebody leave a place like Vietnam?” he asked. “Why would people leave these countries and risk their life to be able to come here. It’s important students understand that.”

The governor also signed SB 1108 into law, a graduation requirement of a civic literacy course and assessment for state college and university students.

HB 233 requires state colleges and universities to hold annual assessments of the “viewpoint diversity and intellectual freedom at their institutions,” the governor’s office said. The goal of this new law is to ensure Florida’s college and university students experience diverse ideas and opinions, including those with which they may disagree.

“It used to be thought that a university campus was a place you’d be exposed to a lot of different ideas,” DeSantis said. “Unfortunately, now, the norm is really that these are more intellectually oppressive environments. You have orthodoxies that are promoted, and other viewpoints are shunned or even suppressed. We don’t want that in Florida.”

“You need to have a true contest of ideas,” the governor asserted. “Students should not be shielded from ideas, and we want robust First Amendment speech on our college and university campuses.”

DeSantis and his administration recently moved to ban the teaching of Critical Race Theory and the 1619 project from Florida schools.