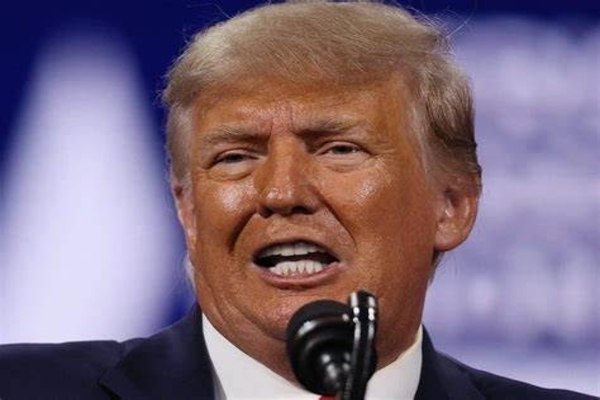 Former President Trump blasted the infrastructure bill in a statement Saturday, calling it a “gift to the Democrat Party, compliments of Mitch McConnell.”

If Mitch McConnell was smart, which we’ve seen no evidence of, he would use the debt ceiling card to negotiate a good infrastructure package. This is a 2,700-page bill that no one could have possibly read—they would have needed to take speed reading courses,” Trump began. “It is a gift to the Democrat Party, compliments of Mitch McConnell and some RINOs, who have no idea what they are doing. There is very little on infrastructure in all of those pages.”

“Instead, they track your driving so they can tax you. It is Joe Biden’s form of a gas tax but far bigger, far higher and, mark my words, far worse,” Trump continued. “They want to track you everywhere you go and watch everything you do! Joe Biden’s infrastructure bill will be used against the Republican Party in the upcoming elections in 2022 and 2024.”

Trump continued, “It will be very hard for me to endorse anyone foolish enough to vote in favor of this deal. The good news is that the progressive wing in the Democrat Party will lose all credibility with this approval.”

Trump explained “Additionally, Kevin McCarthy and Republican House members seem to be against the bill”:

If it can’t be killed in the Senate, maybe it dies in the House! Nancy Pelosi and the Democrats understand that this is the way to get the horrendous $3.5 trillion, actually $5 trillion, Green New Deal bill done in the House.

Mitch is playing right into Nancy’s hands, not to mention the fact Chuck Schumer is already going around saying this is a big victory for the Democrats. Whether it’s the House or the Senate, think twice before you approve this terrible deal.

Republicans should wait until after the Midterms when they will gain all the strength they’ll need to make a good deal, but remember, you already have the card, it’s called the debt ceiling, which the Democrats threatened us with constantly.

Thursday, the Congressional Budget Office (CBO) stated the legislation would add $256 billion to the deficit over ten years; Sen. Steve Daines (R-MT) publicly said he is a no vote, as reported by Breitbart News.

Sen. Chuck Schumer (D-NY) hoped to push the bill through the Senate on Saturday; however, Sen. Bill Hagerty (R-TN) was unwilling to consent to the bill’s advancement due to the CBO’s dismal score of the 2,702-page legislation.