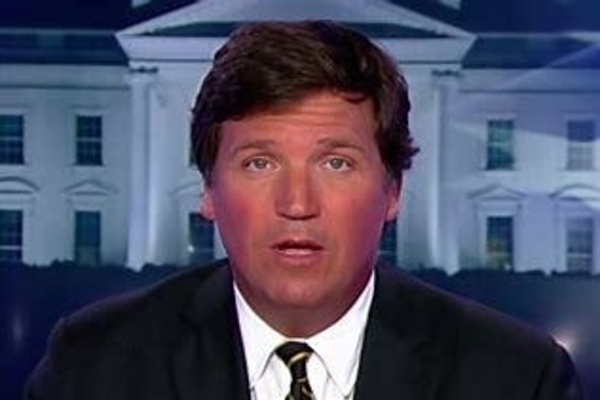 Friday on Tucker Carlson Tonight on Fox News, host Tucker Carlson laid out his thoughts of why Joe Biden is incapable of leading the United States. The fall of Afghanistan to the Taliban was used as the latest proof.

Biden was called “senile,” and there were numerous examples of public contradictions by his appointees, which would not have been tolerated under the Trump administration.

CARLSON: We have learned a lot in the past five days. Maybe the most important thing we’ve learned is that Joe Biden is not capable of running the country. Joe Biden is senile.

Saying that out loud is not an attack on Biden; any decent person feels sorry for him. You watch him gaze vacantly into the middle distance or stumble like a drunk man trying to cross an icy street as he careens through his prepared remarks.

There is no joy in watching any of that; it could be any of us someday and probably will be. It’s not Joe Biden’s fault he can’t think; clearly, it is an indictment of the people around him.

In the months before last November’s election, Joe Biden’s own family knew perfectly well that he was in profound cognitive decline. They were worried about it. They told other people they were worried about it, which is how we know. But they did nothing to stop Biden from running for President, neither did Ron Klain, who is now the White House Chief of Staff.

Klain is highly familiar with Joe Biden’s senility; he works there every day, so does Mike Donilon and Gene Sperling, and Susan Rice, and the rest of the people making decisions in this country very much, including Barack Obama. They all know.

These are hard and cynical and clear-eyed people. They have worked with Joe Biden for many years. Not one of them has any doubt that Biden is failing, and now that’s obvious to the rest of the country. Anyone who has been paying attention already caught on to this, of course, but until recently, it didn’t seem to matter a whole lot.

You saw Biden on television grinning and mumbling; he was up there reminding you to put on your little mask or wear your seatbelt or go easy on the sodium. None of it seemed especially threatening. These are the things that elderly men talk about in real life, “Be safe out there, kids.”

But in the last week, we’ve been reminded how tiny our domestic concerns actually are. They are neuroses born of narcissism. A Chinese flu virus? Please. That’s hardly the scariest thing going on in the world right now. It’s not even close.

The entire U.S. military has just been humiliated by illiterate peasants in turbans, and if that’s not insulting enough, many of them were carrying our rifles as they did it. It makes you wonder about the future of the West and who is going to replace us when we’re gone? Someone in authority probably ought to be thinking about that and about a lot of other things, too.

What are we going to do when the Chinese finally move against Taiwan? How are we going to respond when there’s a credible challenge to the U.S. dollar as the world’s reserve currency? Etc., etc., etc.

There are issues out there — a lot of them, in other words — that matter slightly more than whether you keep your mask over your nose on that Southwest flight to Tucson. It is shameful; it’s embarrassing when you think of how totally frivolous, and up our own butts we’ve been for the last couple of years.

All we can say for certain at this point is that Joe Biden will not be making any of the big decisions going forward. He is not capable of being the President in crisis. So, who will be? We can’t say, but it’s clear if you watch closely that things are changing very fast in Washington.

The people around Biden are moving away from him in ways that are not at all subtle. Why is this happening now? Was it always the plan? Did the party that hates white guys finally realize it was being led by one? Again, we don’t know the answer, but the signs of it are everywhere, and they are strikingly obvious.

Some of Biden’s most senior appointees are contradicting him in public. If you cover politics, it is shocking to see that. It’s a violation of the first and most ruthlessly enforced rule in any White House, which is don’t diminish the boss.

Just hours after Biden assured the country that things were fine in Afghanistan, Lloyd Austin, his Defense Secretary, described the situation in Afghanistan as a disaster, and then Austin repeated this for emphasis. Others are doing the same thing.

Here is Biden this afternoon telling us that American citizens are having no trouble whatsoever getting to the airport in Kabul.

JOE BIDEN (D), PRESIDENT OF THE UNITED STATES: We have no indication that they haven’t been able to get in Kabul through the airport. We’ve made an agreement with the Taliban thus far; they’ve allowed them to go through. It is in their interest to get them to go through.

CARLSON: So, there was the President of the United States going on television today to assure us that things are fine for Americans in Kabul. But just an hour later, here’s The Pentagon spokesman telling you that actually, that’s not true, Americans are being beaten in Kabul. Watch.

QUESTION: Defense Secretary Austin just now, in a briefing call with House lawmakers, said the reports Americans had been beaten by the Taliban in Kabul. Is the U.S. military under orders to stay at the airport and not go protect them?

REAR ADMIRAL JOHN KIRBY (RET.) PENTAGON PRESS SECRETARY: I think we’ve been talking about this throughout the entire briefing. We’re certainly mindful of these reports, and they’re deeply troubling, and we have communicated to the Taliban that that that’s absolutely unacceptable, that we want free passage through their checkpoints for documented Americans.

And by and large, that’s happening.

CARLSON: So, the President tells us that we have an ironclad deal with the Taliban, and everything is cool; an hour later, John Kirby tells us we’re deeply concerned about what the Taliban is doing.

So, in a normal administration with a President who planned on serving out his full four-year term, what you just saw would qualify as a kind of scandal. The Pentagon spokesman would be in serious trouble. He just contradicted his boss, the man who is supposed to be in control of the entire executive branch of government.’

But as we noted, things are changing very fast. Watch it happen again.

Here is Biden from today telling us that al-Qaeda has been driven from Afghanistan.

CARLSON: Once again, just an hour after he said that, the President of the United States is contradicted in public by his own employee. Again, here’s the Pentagon spokesman.

KIRBY: We know that al-Qaeda is a presence as well as ISIS in Afghanistan, and we’ve talked about that for quite some time.

DREW GRIFFIN, CNN SENIOR INVESTIGATIVE CORRESPONDENT: But the President just said that there is no al-Qaeda presence in Afghanistan, and that does not seem to be correct.

KIRBY: What we don’t think is that — what we believe is that there isn’t a presence that is significant enough to merit a threat to our Homeland as there was back on 9/11 twenty years ago.

CARLSON: So, that’s the opposite of what Biden just said. So, here you have the top spokesman for the most powerful agency in the entire government informing us that the President of the United States has no idea what he is talking about.

You don’t see that every day. In fact, you never see it.

But it’s not just Biden’s employees who appear to be turning on him in public, so are some of his key political allies, the neocons, liberals who use the Republican Party for their own purposes for decades before abandoning it when Trump arrived, are now attacking Joe Biden openly and very aggressively. That didn’t take long.

But most telling of all is this. It’s from CNN. Watch.

CLARISSA WARD, CNN CHIEF INTERNATIONAL CORRESPONDENT: It is just an absolute mess, and we heard President Biden say yesterday in his comments to ABC News that this is not a failure and I think a lot of people outside that airport, particularly those taking the kinds of extreme actions we’re just talking about would like to know if this isn’t failure, what does failure look like exactly?

CARLSON: So, Joe Biden failed, and he is lying about it. That’s what CNN just told us. It is hard to overstate the significance of the clip you just saw.

CNN is not a news network. CNN is a political organization. Its anchors and reporters don’t decide for themselves what to say (on camera); they are told what to say. They are told in highly specific terms every weekday morning on a call with their commander, Jeff Zucker.

There is no intellectual freelancing at CNN. Here’s what I think.

No, it’s a united front, a single hymnal for the entire congregation. When CNN takes a position or changes its position on something, it changes as one — everybody. From the chirpy morning dingbats to Don Lemon in the night shift, they all say precisely what they are told to say. Ever watch the channel?

And now, they are saying something very, very different.

Consider this person. This is a former member of the morning zoo crew on a contemporary hit station in Yakima, Washington. On a good day, she is probably operating with a functional IQ of about 85. So, it’s fair to say she is not coming up with her own material.

And yet, here she is, visibly outraged on the air telling you what an incompetent bad person Joe Biden is.

BRIANNA KEILAR, CNN ANCHOR: The rapid fall of Afghanistan stunning the Biden administration and this nation, quite frankly, and many of the promises, predictions and the words of the President and his White House are coming back to haunt them.

CARLSON: What is going on here? These are literally the people who got Joe Biden elected President. He would not be President without these people. And now, just seven months into his administration, they are telling you that he has failed personally. It does not make sense, and it’s not the issue. Afghanistan is hardly the first disaster.

As of tonight, our southern border has collapsed, the murder rate is spiking in our cities, the COVID vaccines do not work, inflation is out of control, and the country’s entire population of school children hasn’t been educated in more than a year. All of that has been going on; none of it seemed to bother CNN in the slightest. In fact, they reserved their energy to attack anyone who noticed those trends.

But now, suddenly, their anchors are completely and totally enraged because Americans are trapped in Afghanistan. They don’t notice the 70,000 who die every year of drug ODs, but this has sent them into a paroxysm of self-righteous rage.

Call us cynical, but we don’t buy it. Something else is going on here. We don’t know what it is, exactly, but it’s pretty obvious.