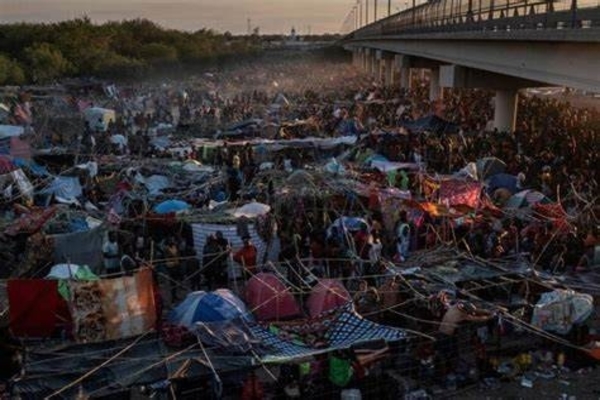 This will allow the migrants to take jobs from Americans to compete for housing, ask for green cards and asylum, and put their children into the already crowded American classrooms.

The catch and release process will encourage more Haitians to endure the long trek to the U.S. border.

The quiet promises of catch-and-release are hidden behind showcase videos of small-scale deportations and behind televised bluster from top officials, including Alejandro Mayorkas, the pro-migration chief of the Department of Homeland Security (DHS).

Senior DHS officials are telling NBC News the administration will prioritize deporting single Haitian adults and families [who are] not claiming asylum. Unaccompanied children and most families asking for asylum can stay in the U.S.

Fox News Bill Melugin tweeted that U.S. Border Patrol Chief Raul Ortiz “told me “single adult men will be expelled via Title 42, but most family units will be processed and released into U.S.”

They’re not cartoons in the imagination of some liberal do-gooder. They’re people who have a good sense of what they want and what the odds are … [So] if anyone who brings a child with him is exempted from the [deportation] rules, then sending back the single adults only [to Haiti] is not really sending the [deterrence] message that people think it is, because it is saying [to Haitians] “Always make damn sure you have a kid with you, and then we’ll let you go into the U.S.”

During 202, roughly 2 million legal and illegal immigrants are expected to be invited into the U.S. by the Biden administration. The inflow will deliver approximately one migrant for every two American births.

Officials also tell journalists that children who separate from their parents, and youths who claim to be under age 18, will be allowed to enter the United States via the 2008 loophole for “Unaccompanied Alien Children.”

But Mayorkas offered a much sterner message to the network T.V. cameras during a staged and concise press conference in Del Rio, Texas, on September 20. For example, he said:

Border Patrol is coordinating with ICE and the U.S. Coast Guard to move individuals from Del Rio to other processing locations … in order to ensure that migrants are swiftly taken into custody, processed and removed from the United States, consistent with our laws and policies [emphasis added].

Apparently, Mayorkas believes “our laws and policies” allow all migrants to ask for asylum and take Americans jobs while they wait several years for a court date.

His stern message was wrapped in vague, passive-voice sentences minimizing his commitments about who would do what and when. For example, he declared:

“What he is describing is not what [journalists and T.V. viewers] think it is,” responded Krikorian.

Officials can allow migrants to stay if they are put into the Expedited Removal process; the process will enable migrants to remain once they ask for asylum.

Migrants who are expelled under Title 42 cannot ask for asylum and cannot stay.

“Expedited removal is one more example of a provision in the migration law that has become the opposite of what people think,” said Krikorian. “It has become the conduit for release into the United States.”