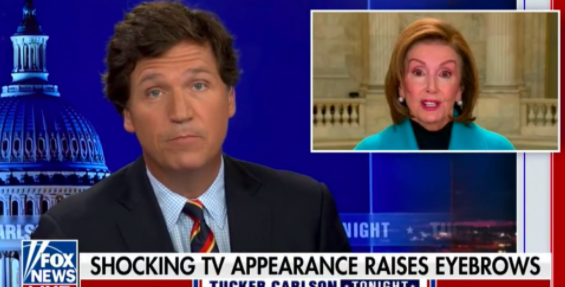 “Let’s be clear this wasn’t video of Michael Jackson performing his hit songs of the 1990’s. This appeared to be a living version of the international pop star that news reports claim died of a drug OD more than a dozen years ago,” Carlson continued.

“Yet, despite those claims, there he was. Fully undeniably Michael Jackson talking on television,” Carlson said facetiously.

The Fox News host went on to roll a clip of Nancy Pelosi appearing on “Face The Nation.” Sporting a new appearance after undergoing alleged plastic surgery, Speaker Pelosi’s eyebrows became a topic of discussion across social media on Monday after they appeared to be extremely high.

“See,” Carlson said. “Michael Jackson. That was him! No Billy Jean. Apparently he’s given up singing now to tell lies about politics.”

“If you’ve ever seen Michael Jackson you cannot forget the face. So admittedly, he’s had a lot of work done since we saw him last,” the Fox News host concluded.