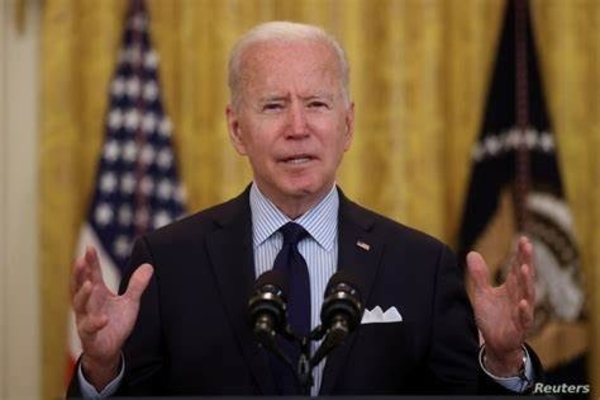 President Biden’s reactions to the grim jobs report released on Friday was defiant.

“We’re still digging out of an economic collapse that cost us 22 million jobs,” said Biden, speaking from the East Room of the White House. “We’ve got work to do.”

“Today, there is more evidence that our economy is moving in the right direction, but it’s clear we have a long way to go,” he said.

The president dismissed media commentary pointing out the disparity between the estimated and actual jobs created in April.

“Listening to commentators today as I was getting dressed, you might think that we should be disappointed,” Biden said with a chuckle.

“Quite frankly, we’re moving more rapidly than I thought we would,” he said, arguing he always felt the recovery would be a “marathon,” not a “sprint.”

Biden’s decision to expand checks to unemployed Americans is questioned by Republicans, arguing it keeps workers on the sidelined during the pandemic.

Biden said the economic news only proved the checks were necessary.

“This is progress,” Biden continued. “And it’s a testament to our new strategy of growing this economy from the bottom up and the middle out.”

Biden also defended his call for $6 trillion in spending and dramatic tax hikes on businesses and the wealthy to boost the economy.

“The American people are counting on us. So, let’s get it done,” he said.

The April jobs report resembled an optical illusion, with people making differing observations from a dataset that didn’t form a clear image.

It sets the stage for a multitrillion-dollar fight on infrastructure, jobs, and families that will take up much of the White House’s time over the next few months.