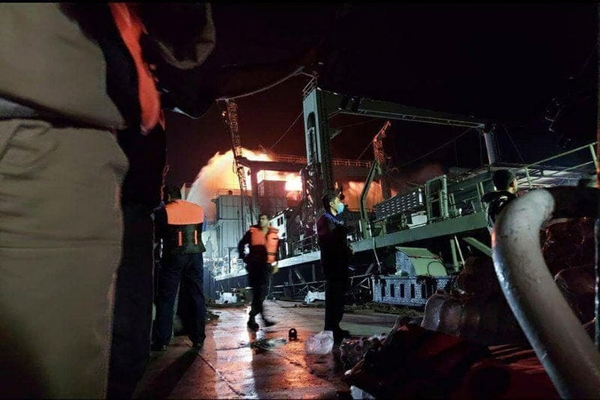 The largest warship in the Iranian navy caught fire and sank Wednesday in the Gulf of Oman under unclear circumstances, semiofficial news agencies reported.

The IRNA news outlet reported multiple efforts to save the British-built ship over 26 hours. This is the latest disaster to it the trouble-plagued Iranian navy.

Video of this incident has been making its way around social media outlets, and the vessel disappears beneath the waves in a cloud of acrid smoke.

The Kharg, named after the island that serves as the main oil terminal for Iran, erupted in a blaze around 2:25 am; firefighters tried to contain it, the Fars news agency said.

The vessel went down near the Iranian port of Jask, some 790 miles southeast of Tehran on the Gulf of Oman near the Strait of Hormuz – the narrow mouth of the Persian Gulf.

Sailors were wearing life jackets evacuating the vessel as a fire ablaze behind them circulated on Iranian social media.

The Kharg is referred to by State TV and agencies as a “training ship.” Fars published a video of thick, black smoke rising from the ship early on Wednesday morning.

The Kharg served as one of a few vessels in the Iranian navy capable of providing underway replenishment at sea for its other ships. It carried heavy cargo and served as a launch point for helicopters, according to AP.

The warship was built in Britain and launched in 1977, entering into the Iranian navy in 1984 after negotiations following Iran’s 1979 Islamic Revolution.

Tehran has offered no cause for the fire; however, the ship’s loss marks another navy disaster for Iran dating back to 2018 when an Iranian navy destroyer sank in the Caspian Sea.

In 2020 during an Iranian military training exercise, a missile mistakenly sank a naval support vessel near the port of Jask, killing19 sailors and wounding 15, as Breitbart News reported.

Later that year, a wooden replica U.S. aircraft carrier attacked by Iran as part of a propaganda exercise capsized in the Strait of Hormuz, blocking a key shipping channel in the process.

“What was shown today in these exercises, at the level of aerospace and naval forces, was all offensive,” Iran’s Revolutionary Guards commander Major General Hossein Salami told state television in the days before the fake wooden carrier sank.