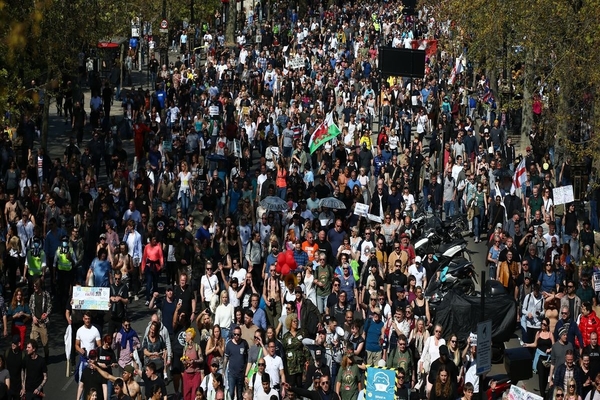 Thousands of protesters marched through London, railing against coronavirus restrictions and the possibility of vaccine passports being implemented.

The march began in Hyde Park when a flash mob organized around 1 pm; London mayoral candidates Laurence Fox and David Kurtne were in attendance.

Protesters marched through the streets chanting “Freedom” and “Take off your mask,” some carried signs saying “No to vaccine passports” and “Lockdowns kill.”

Protesters shared concerns about the implementation of vaccine passports with Breitbart London. One protester said she believed it would be the “beginning of the end.”

Asked how she felt about Boris Johnson’s response to the coronavirus, she said that she believes the Prime Minister is “middle management,” saying that “he’s just following orders and I think he’s on his way out. I think he’s just doing a job and getting well paid for it.”

On social media, activists claimed that hundreds of thousands turned out to the rally, although figures from the mainstream media estimated the number at around 10,000.

The protest was largely peaceful until the police attempted to disperse the crowd gathered towards evening in Hyde Park.

In a statement from the Metropolitan Police, eight officers were injured, and five people were arrested.

BBC reporters accused protesters of promoting “conspiracy theories,” including supposed QAnon slogans, which prompted a widespread backlash on social media, with the hashtag #DefundTheBBC trending on Twitter in Britain.

Over the past few weeks, opposition to the notion of implementing vaccine passports has grown. Leaders with the church and business, as well as politicians, are coming out against the scheme.

Prime Minister Boris Johnson has downplayed the notion of vaccine passports during the initial re-opening phase but says that health passes are likely to become a “feature of our lives.”