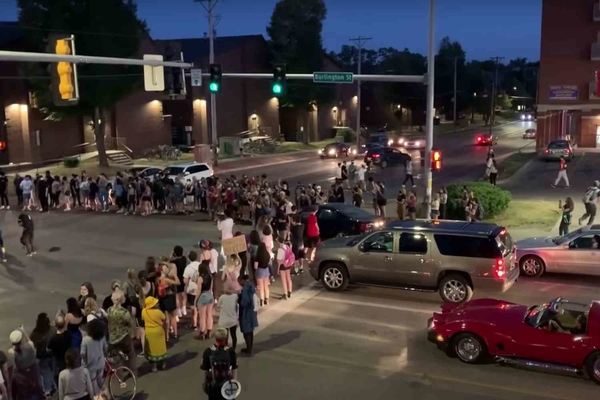 The bill additionally increases penalties for people blocking the roadways during a demonstration, KHUO reported.

Bill 1674 was signed into law on Wednesday by Gov Kevin Stitt (R); the outlet continues:

The measure says drivers will not be held liable if they flee the scene of a riot and injure or kill individuals if they think it was necessary to protect themselves from serious injury or death. The bill also states that the driver must exercise “due care” when the injury or death occurs.

The bill was crafted following a viral altercation last summer where a pickup truck drove through a crowd protesting the death of George Floyd on a Tulsa interstate. Several people were injured in the crash, including one man paralyzed from the waist down after falling off an overpass.

Protesters damaged the vehicle as it moved through the group, and witnesses accused the driver, who had his family with him, of intentionally driving through the crowd of protesters.

He has not been charged.

“HB1674 also makes it a misdemeanor punishable by up to a year in jail and a [$5,000] fine to block a public street during a demonstration,” the outlet said.

Rep. Kevin West (R) is the author of the bill; in a press release, he said, Citizens witnessed numerous riots across the country, Oklahoma included, in the summer of 2020.

On the day this bill was signed into law, we even had an outburst in the House of Representatives. That thankfully was resolved quickly and without violence, but it illustrates that we are a nation governed by laws. I certainly support the right to peacefully protest and assemble. I will not, however, endorse rioters that spill onto city or state streets, blocking traffic and even harming property of vehicle operators who are simply trying to move freely. This law gives clarity to those motorists that they are in fact within their rights to seek safety.

“Marchers loudly chanted their protest of several bills including one designed to protect people being attacked in their vehicles during protests,” the report said.

The bill is “meant to protect individuals and families who find themselves trapped in a frightening and dangerous situation and are simply trying to protect themselves,” states the author of the bill in the Senate, Sen. Rob Standridge (R).