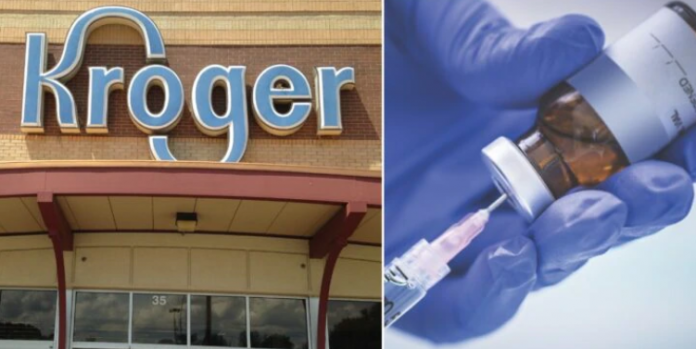 (Big League Politics) – The grocery store chain Kroger has announced Medical Jim Crow policies for their unvaccinated workers that will go into effect starting in 2022.

Kroger will be denying paid emergency leave to unvaccinated patients who contract COVID-19. They will also add a fee of $50 per month to the unvaccinated employees or they will be denied health care benefits.

They are reportedly taking these measures in an attempt to comply with the Biden regime’s unconstitutional and illegal federal vaccination mandates, which have been repeatedly struck down by the courts.

Big League Politics has reported on the courts rebuking Biden’s coercive attempts to force workers to get the vax in order to stay employed:

“A federal judge blocked a Biden Covid-19 shot mandate for health care workers nationwide, New York Post reported. This marks a huge legal blow for the Biden administration, who was planning on having the arguably unconstitutional mandate begin next week.

US District Judge Terry Doughty issued a preliminary injunction for workers across the country, one day after another judge stopped the mandate in 10 states.

“This matter will ultimately be decided by a higher court than this one,” Doughty wrote in a 34-page ruling. “However, it is important to preserve the status quo in this case. The liberty interests of the unvaccinated requires nothing less.”

Doughty was reportedly appointed to the Western District of Louisiana court by former President Donald Trump. The Judge said that the 14 states whose lawsuit led to his ruling had raised questions about whether the federally funded Centers for Medicare and Medicaid Services had exceeded their authority by attempting to force innoculations.

“There is no question that mandating a vaccine to 10.3 million healthcare workers is something that should be done by Congress, not a government agency,” Doughty wrote. “It is not clear that even an Act of Congress mandating a vaccine would be constitutional. Certainly, CMS does not have this authority by a general authorization statue.”

More than 17 million workers in about 76,000 health care facilities would have had to get their first dose of a COVID shot or face being fired by December 6 under the CMS guidance.”

Kroger’s shameful behavior is what is allowing vaccine tyranny to take root throughout society. Multinational corporations have sold out the Bill of Rights and Constitution.