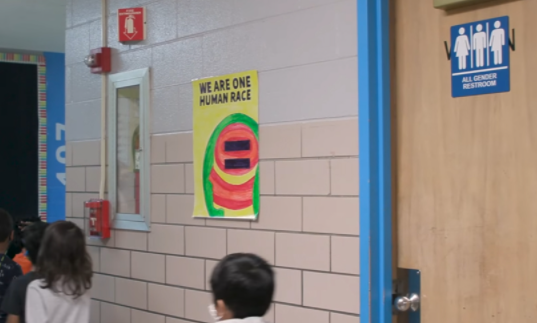 (The Post Millennial) – In the Chicago Public School system, students are pushed through to graduation regardless of demonstrating proficiency in reading, math, or writing.

But instead, CPS is dedicated to switching out bathroom signs in order to promote gender equality. This focus was highlighted on social media Thursday evening, as the planned overhaul to school bathrooms had a December 1st deadline.

All Chicago public schools will be required by December 1st to change bathroom signage to gender neutral terminology.

CPS says “all bathrooms are open for use by anyone who feels comfortable.” pic.twitter.com/Q2p878Q3jU

“We’re also taking steps to create more inclusive and supportive schools. One change that will be implemented this school year relates to our school bathrooms. In compliance with new federal guidelines, all CPS students and staff will have fair and equitable access to bathroom facilities that align with their gender identity.”

This is an example of the signage that’ll be at every school’s restroom.

It’s unclear whether or not Chicago Public Schools custodial staff will have the basic supplies necessary to clean these bathrooms. A report by the Chicago Sun Times earlier last month outlines the decrepit conditions faced by janitors.

“Our district’s Office of Student Protections and Title IX is also working on a long term plan to create more permanent signage for our bathrooms,” the video says. A caveat is that school staff will still have their own separate restrooms despite this overhaul.

On the Chicago Public Schools website link the video points out, there’s an online complaint form to report “sex/gender-based” discrimination, harassment, and all other forms of misconduct.