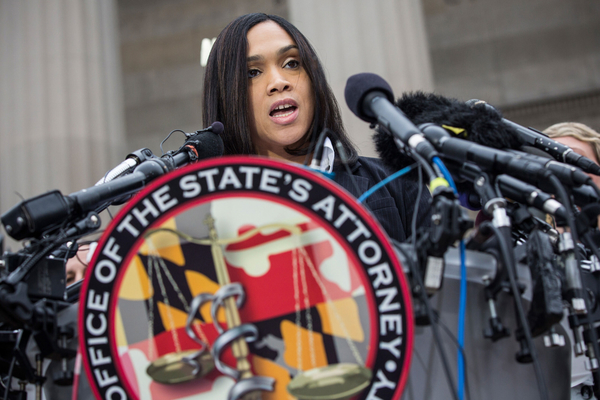 The Baltimore City States Attorney’s Office has filed a complaint with the Federal Communications Commission (FCC) alleging local news station coverage ” “blatantly slanted, dishonest, misleading, racist, and extremely dangerous,” in a move many believe is Mosbys attempt to censor reporting on her own federal criminal investigation.

The May 5 complaint, addressed to FCC acting chairwoman Jessica Rosenworcel, accuses WBFF (a.k.a. FOX45 News) — the Baltimore-based Fox-affiliate — of partaking in an “intentional crusade against … Mosby, which given today’s politically charged and divisive environment, is extremely dangerous.” It also details what Mosby’s communications director, Zy Richardson, believes to be a “disconcerting and dangerous pattern: beginning with a slanted, rigged, misleading, or inflammatory headline; followed by conspiracy theory; and supported with guest commentary from disgruntled ex-employees or political opponents that[sic] lend false credibility.”

“The truth of the matter,” Richardson says, “is I am deeply worried that if the WBFF’s coverage is not curtailed and ceased, then someone is going to get hurt. I implore and encourage you … to enlist the full investigative and enforcement powers granted to you by the Federal government to take action against the WBFF as soon as possible.” (Emphasis added).

Richardson cites FCC rules and guidance that dictate “broadcasters may not intentionally distort the news” and that “rigging or slanting the news is a most heinous act against the public interest.” To Richardson, an investigation “would prove that the WBFF administrators are guilty of such ‘heinous acts.’”

However, Richardson appears to have omitted the FCC’s intent:

But in this democracy, no Government agency can authenticate the news or should try to do so. Therefore, we will eschew the censor’s role, including efforts to establish news distortion in situations where Government intervention would constitute a worse danger than the possible rigging itself.

The FCC further explains that its “authority to respond to these complaints is narrow in scope, and the agency is prohibited by law from engaging in censorship or infringing on First Amendment rights of the press,” and it “cannot interfere with a broadcaster’s selection and presentation of news or commentary.”

The complaint argues that the number of articles WBFF has published about Mosby when compared to that of three other local stations, “would give any reasonable person pause.” According to the letter, in 2020, WBFF wrote 248 stories specifically about Mosby, compared to WBAL’s 26 stories, WJZ’s 46 stories, and WMAR’s 10. Despite this, it appears that a portion of Mosby’s complaint may be rooted in WBFF’s status as a Fox-affiliated station.

Indeed, Richardson argues, not citing examples, that “[i]n the public sphere, Fox News is infamous for its bias against people of color, and even more against those who could be deemed ‘progressive’ people of color.” The tirade against Fox News continued, as Richardson pointed out that “the Fox national news network airs a nightly show with Tucker Carlson, despite recent calls by civil rights groups to terminate his employment because of Carlson’s frequent endorsements of white supremacy views.”

WBFF, in response, stated that “Mosby who is the focus of a federal criminal investigation, the subject of a scathing report from the City Inspector General and whose house is under an Internal Revenue Service lien for unpaid federal income tax is attacking a media source for its reporting on her,” asserting that “FOX45 News is committed to investigating corruption in public officials, asking tough questions and holding leaders accountable … While we understand that it may not be popular with the individuals and institutions upon which we are shining a light, we stand by our reporting.”

This comes as congressional Democrats mount a pressure campaign to force the FCC to “content-based censorship” over the sale of a Miami, Florida, radio station to a conservative broadcaster.